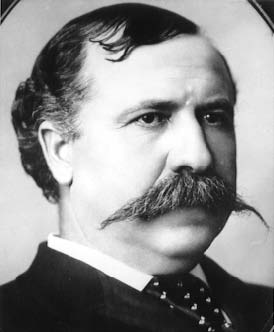 Job A. Cooper served as Colorado governor from 1889 to 1891. It was a time of great economic prosperity in the state, and Cooper was one of many who became involved in numerous business ventures related to Colorado’s industrial development.

Cooper hailed from Greenville, Illinois, where he was born November 6, 1843. When the Civil War broke out, he was studying at Knox College in Galesburg. He interrupted his studies to serve in the 137th Illinois infantry, then returned to school following the war. After graduating, he studied law and was admitted to the bar in 1867. That same year, he married Jane Olivia Barnes. Setting up a small law practice, Cooper soon became interested in politics, serving as the Clerk and Recorder of Bond County, Illinois.

In 1872 Cooper and his family left Illinois for Denver, where he again set up a law practice. But Cooper soon became more interested in the many new and expanding industries in the young city. Involvement in a number of business ventures including banking, mining, insurance, real estate, and the cattle industry brought Cooper significant wealth, and he constructed a lavish mansion at the corner of Colfax and Grant streets, diagonal from the future site of the State Capitol. He also financed the Cooper Building, an elegant office block at 17th and Curtis downtown that was demolished in 1970.

In 1888 Cooper, a Republican, ran for Governor against Democrat Thomas Patterson, the owner-editor of the Rocky Mountain News who had served as territorial delegate to Congress and had been instrumental in Colorado’s gaining statehood in 1876. Patterson would later go on to serve as United States Senator from 1901 to 1907. Cooper, meanwhile, won the 1888 governor’s race with 49,490 votes to Patterson’s 39,197. 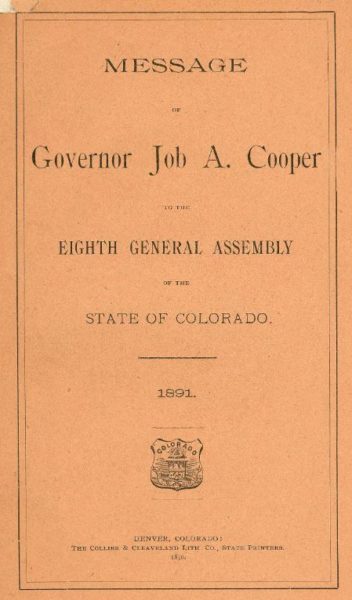 Cooper accomplished much during his term as governor. In his January 1891 Message to the Legislature (what we would call a State of the State speech today), Cooper outlined some of the priorities and accomplishments of his term, including state finances, ballot reform, industrial development, and even Colorado’s participation in the upcoming 1893 World’s Columbian Exposition. He had a particular interest in community services; he signed laws creating a state reformatory in Chaffee County and an orphan’s home in Denver, and in his 1891 Message suggested the creation of a State Board of Charities, which was established two months later. His wife, Jane, also took an interest in charitable and philanthropic efforts. She served as a trustee of the Colorado Woman’s College and in 1910 was one of the principal founders of the Craig Colony, today’s Craig Hospital.

Governor Cooper chose not to run for re-election in 1890 (at that time, governors served two-year terms). He was succeeded by fellow Republican John L. Routt, who had previously served as governor in the 1870s. Cooper’s involvement in state government didn’t end after his term, however. The cornerstone of the State Capitol had been laid on July 4, 1890, during Cooper’s term as Governor, and he continued to serve as a member of the State Board of Capitol Managers after his term ended. Cooper is also credited with convincing the board to construct the building in granite instead of less-durable sandstone, which had originally been considered.

Business and community efforts continued to occupy Cooper until his sudden death at age fifty-six in 1899. Originally buried at Denver’s Riverside Cemetery, his remains were moved to Fairmount Cemetery in 1918 to join those of his wife, Jane, who died that year. Their mansion was demolished in 1928, after Colfax was zoned a commercial street.