This year, as students head back to school, classes will be a very different experience. This has also been the case during other times in our nation’s history, particularly during the two World Wars. In those times, like in our own, students’ everyday lives were affected by worldwide events and that meant schools had to adapt. 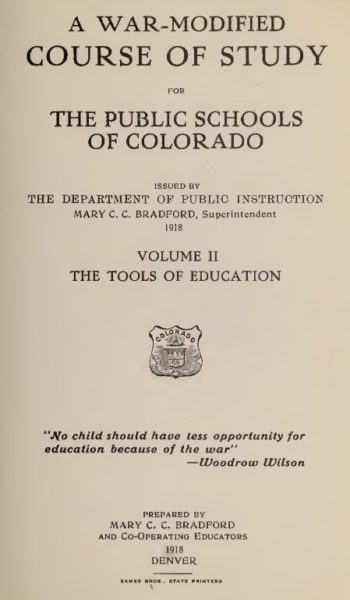 The State Publications Library’s digital collection offers primary source documents that tell the story of how Colorado’s schools faced the challenges brought on by the two world conflicts. In 1918, during the First World War, the state’s Department of Public Instruction (today’s Department of Education) issued five volumes of A War-Modified Course of Study for the Public Schools of Colorado. Educators around the state contributed to the publication, which updated the state’s teaching standards to correspond with events surrounding the United States’ entry into the war. Volume 1 of the series focused specifically on the teaching of history and civics, the subjects most affected by current events. The subsequent four volumes were issued at the very end of the war, and dealt with issues of how American life and society had changed because of it. These volumes explored all subjects, from grammar to mathematics, through the lens of a changed world. In addition, they provided guidance on issues beyond subject matter, including school building architecture, fire prevention, hygiene and sanitation, libraries, extracurricular activities, and patriotism. The impact of the War on Colorado schools can be seen by comparing the 1918 Course of Study books with those published in other years during the period from 1893 to 1926, which can also be found in the library collection. 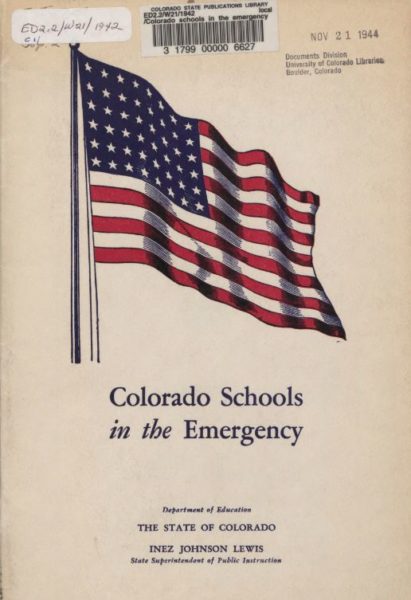 Schools were once again affected during World War II, and the Department of Public Instruction once again issued guidance. Colorado Schools in the Emergency was published in early 1942, just a few weeks after Pearl Harbor, to “present suggestions as to directions of a school program which would serve our country in its present crisis.” The document included guidance on how schools could contribute to the war effort, along with information about health, vocational education, and issues relating to the country’s emergence from the Great Depression. Like the volumes from World War I, the publication also took a long view, exploring what societal changes the war could bring.

These publications, from each of the World Wars, provide valuable historical insight into how schools faced extraordinary times of national crisis.