Colorado has an amazing array of wildlife – birds, fish, reptiles and amphibians, and mammals large and small. If you live in urban areas, small mammals are some of the most common wildlife you will encounter. Even more species of small mammals can be found in mountainous areas, on the grasslands, or near rivers and streams. Some species are quite common; others are threatened or endangered. Here’s part 1 of a look at some of the different varieties of small mammals that can be found in Colorado, and resources from our library and the State of Colorado that you can use to learn more.

Rodents are the largest group of mammals in the world; in fact, nearly 40% of all mammals fall under the order Rodentia. Rodents vary widely in size, coloring, diet, habits, and habitat; yet one thing they all have in common is a single pair of continuously-growing incisors. Many rodents, such as guinea pigs and hamsters, are common pets; but wildlife species such as beavers, mice, and squirrels are also rodents. Colorado has a wide variety of rodents, both native and non-native, that can be found in every part of the state. 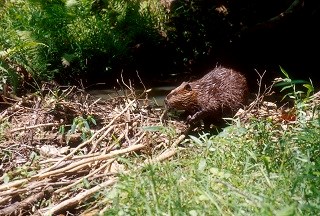 Hunted nearly to extinction in the early-1800s fur trade, this industrious rodent has managed a great comeback. Beavers are North America’s largest native rodents. Colorado Parks and Wildlife notes that “it takes a beaver approximately 30 minutes to fell a 5-inch diameter tree.” Beaver dams have helped create the mountain ponds, streams, and meadows we see today. “No mammal other than humans has as great an influence on its surroundings. This is a ‘keystone species’ in riparian communities; without them the ecosystem would change dramatically.” Beavers have been studied in Colorado for many years; A Contribution Toward a Bibliography of the Beaver (1955) and The Beaver in Colorado: Its Biology, Ecology, Management and Economics (1964) are two of the earlier studies that are available in our library collection. Influential naturalist Arthur Carhart also conducted a significant beaver study in Colorado in the 1940s; his reports can also be viewed at our library.

Colorado is home to numerous species of mice and rats, and many are native to our state. The most common is the deer mouse, which can live anywhere from the mountains to the plains. Some of the less common species have unique characteristics. The grasshopper mouse, for instance, is a carnivore. In addition to hunting insects and worms, it has also been known to kill and eat lizards and even other mice!

Another interesting species is the tiny Ord’s kangaroo rat. These reddish-brown and white rodents live in Colorado’s lower elevations, and are well adapted to our state’s climate because they can survive without drinking water. They’re known as kangaroo rats because of their large back feet, which they use to jump and bounce. Kangaroo rats are mostly nocturnal.

One species that is officially threatened is the Preble’s meadow jumping mouse. Other than a few places in Wyoming, this rare species is only found in Colorado’s northern Front Range. Because so much of its habitat has been urbanized, this mouse is rapidly disappearing. Colorado State University’s Natural Heritage Program has produced several studies of Preble’s meadow jumping mouse, including surveys at Warren Air Force Base and at the U.S. Air Force Academy.

Sometimes called “meadow mice,” voles are another type of small rodent. Voles are plumper and rounder than typical mice and rats, with rounder heads and short, stubby tails. They live in burrows and can usually be found in grassy meadows, marshes, and riparian areas. The much larger muskrat is also a member of the vole family. Muskrats live near water and are sometimes mistaken for beavers. Unlike meadow voles, muskrats have long tails. 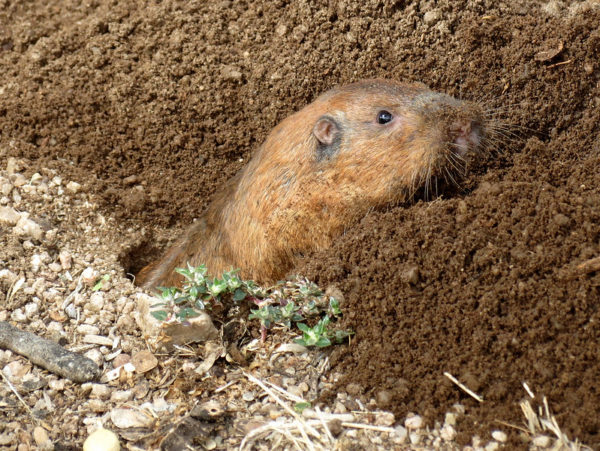 This is a small, burrowing rodent that typically stays underground so is very rarely seen. They can be found in all parts of Colorado. Their “pockets” are located in their cheeks, and they use them for carrying food and nesting materials. Pocket gophers are efficient burrowers who provide a beneficial service by aerating the soil. They can move as much as four tons of soil to create their burrows; in the winter, they can burrow through packed snow to find food on the ground. Colorado has four species of pocket gopher: the northern, plains, chestnut-faced, and valley (or botta’s) pocket gopher. 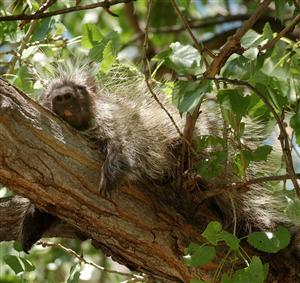 Weighing up to 33 pounds, porcupines are among the largest of Colorado’s small mammals. Porcupines are not overly common in Colorado but can mainly be found in wooded areas and pine forests. Their diet consists of plants and bark, and they sleep in trees. A porcupine’s body can have 15,000-30,000 quills. Check out Porcupines and Skunks: Masters of Defense for more on how porcupines use their quills for protection.

Prairie dogs are sometimes mistakenly called gophers, but they’re actually a type of ground squirrel.  Colorado is home to three species of prairie dog, the black-tailed, white-tailed, and Gunnison. The best known is the black-tailed prairie dog, found in Colorado’s grasslands. Highly social animals, they protect each other from predators both by their distinct warning call and by standing on their burrows as lookouts. Their sophisticated underground burrows provide an additional source of protection from predators.

Black-tailed prairie dog populations are being monitored because so much of their habitat is disappearing due to both farming/ranching and urbanized development. But prairie dogs are vital to the grassland ecosystem. They control vegetation, provide habitat for other species like burrowing owls, and aerate the soil, which promotes plant growth. According to CPW, “Studies have found that vegetation growing within a prairie dog town is higher in protein and nitrogen and favored for grazing by bison, pronghorn and elk.” Our library collection includes several publications about black-tailed prairie dogs, including Black-tailed Prairie Dog Study of Eastern Colorado and Black-tailed Prairie Dog Surveys in Crowley, Otero, Pueblo, and Eastern Huerfano Counties.

The black-tailed prairie dog is found in eastern Colorado, while the other two species live in the western part of the state. Learn more about these species in the Colorado Gunnison’s and White-tailed Prairie Dog Conservation Strategy.

Sometimes called a “whistle-pig” for its distinct call, the yellow-bellied marmot lives in the higher elevations of Colorado. Marmots are members of the family Sciuridae, which includes squirrels, chipmunks, and prairie dogs. Marmots store up fat in the fall and then hibernate during the winter. In the summer, they can often be viewed on large rocks and boulders, sunning themselves. 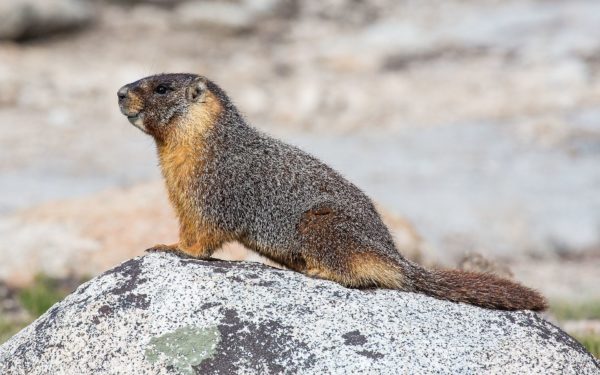