The Colorado State Library is located on Colfax Avenue, as is the State Capitol. It’s one of the city’s busiest thoroughfares, with a colorful reputation and an intriguing history.

The earliest settlers in the Denver area knew it as Grand Avenue or the Golden Road, but residents advocating for Colorado statehood dubbed it Colfax in 1868. It was named to flatter Schuyler Colfax, the Speaker of the U.S. House of Representatives, into supporting the statehood cause. Schuyler Colfax later served as Vice President under Ulysses S. Grant.

Denver’s earliest streets – today’s downtown – were oriented to Cherry Creek and the South Platte, but later streets were platted east-west, which is why we have two different grid systems in Denver. Colfax is the main east-west street in the area, while Broadway is the main north-south road. At Broadway, Colfax divides into East Colfax and West Colfax. Each developed in quite different ways. 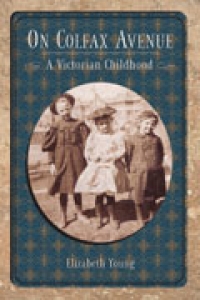 Many people today are surprised to learn that Colfax near downtown was originally an upper and upper-middle class residential district. Some of the city’s most beautiful homes were located on the street, which gained prestige from the construction of the State Capitol in the 1880s and 1890s. Colfax became an address for the wealthy and powerful – Governor Job Cooper, Senator Lawrence Phipps, Denver Mayor Platt Rogers, and many other leading citizens had homes on East Colfax. William N. Byers, the founder of the Rocky Mountain News and Denver’s biggest booster, lived in an attractive home at the corner of Colfax and Sherman, the site where the State Library is now located. One Colfax resident was Elizabeth Young, who grew up in a spacious home just west of Broadway, in what is now Civic Center Park. Her memoir, On Colfax Avenue: A Victorian Childhood, published by the Colorado Historical Society and available for checkout from our library, is a fun and nostalgic look at everyday life in Denver around the turn of the last century.

Everything changed for Colfax, however, when the concept of zoning was introduced to Denver. By that time, wealthy residents were already vacating the Capitol Hill area and moving to new neighborhoods south and east of the city. East Colfax was zoned a commercial street in 1925, and many of the great mansions were demolished to make way for commercial structures and apartment buildings. Today, Colfax is said to be America’s longest commercial street. However, clues to Colfax’s residential past can still be seen if you look up. Frequently, commercial storefronts were added onto existing houses, often with only the rooftops peering out from behind.

Colfax near downtown is also the location of the “Capitol Complex,” the collection of government buildings that make up the nucleus of Colorado state government operations. The State Capitol is located on Colfax thanks to Henry Brown, a landowner who donated the parcel in 1868 to the Territory of Colorado, under the assumption that statehood would soon be achieved. But that took another eight years. Afterward, the new state government neglected to build anything on the site for so long that Brown sued the State to get his land back, which by then was worth a fortune. Brown’s suit was denied, and in 1886 construction finally began. (Today, a mini-museum in the Capitol is known as Mr. Brown’s Attic). Within a few decades, there wasn’t enough space in the Capitol to house all of state government, so several other buildings were subsequently built. Some of the earlier buildings are profiled in the 1942 publication Colorado Capitol Buildings.

With the growth in popularity of the automobile, Colfax was designated U.S. 40. By mid-century, middle class families had time and money to spend on tourism, so both East and West Colfax were dotted with motels and restaurants. When I-70 and the 6th avenue freeway were opened, Colfax, while still officially maintaining its highway designation, went back to being an urban street. By that time, “white flight” was occurring in urban Denver, and Colfax gained a reputation for wickedness with its drugs, strip clubs, and old motels that turned to seedier uses. East Colfax also became known for its nightlife, with famous entertainers like Judy Collins, Bob Dylan, and the Smothers Brothers getting their start on Colfax. The street has also been featured in several Hollywood films, including The Glenn Miller Story; Every Which Way But Loose; and Things to Do in Denver When You’re Dead.

West Colfax, heading through west Denver and Lakewood toward Golden, developed as a more working-class, multi-ethnic area than its eastern counterpart. West Colfax has many connections to Denver’s Hispanic and Jewish communities. The latter established synagogues, schools, and sanatoriums on Colfax. The book Denver Inside and Out, which can be checked out from our library, contains the article “In Search of Wealth and Health: Denver’s Early Jewish Community.” Jeanne Abrams, the article’s author, also wrote Blazing the Tuberculosis Trail: The Religio-Ethnic Role of Four Sanatoria in Early Denver, also available for checkout. One of the sanatoria profiled in Abrams’ book is the Jewish Consumptive Relief Society on West Colfax. Jewish sanatoria were not confined to the west side, however; Denver’s National Jewish Hospital, which also began as a sanatorium for tuberculosis patients – albeit the wealthier ones – is located on East Colfax at Colorado Boulevard.

East and West Colfax split off at Broadway, with 15th Street heading through downtown while West Colfax angles south of 15th Street on its way west toward Golden. The Colfax Viaduct, first constructed in 1917, crosses from the Auraria area over I-25 and ends near Federal Boulevard. Two reports available from our library, Colfax Viaduct Phase I, from 1982, and Stone Matrix Asphalt: Colfax Avenue Viaduct, from 1996, provide technical detail on the Colfax Viaduct. Recently, the Colorado Department of Transportation (CDOT), has discussed changing the old 1959 cloverleaf interchange at Colfax and Federal.

Today, Colfax is one of the city’s most diverse streets, featuring expensive new developments as well as some of the city’s most economically challenged residents. It has long been a transit hub, first for streetcars and later for buses. Traveling along Colfax, you will see buildings from every decade of the past 130 years. In 2006-07, History Colorado provided a grant for a survey of East Colfax’s historic buildings. The resulting report provides historic context on the street as well as a detailed look at its historic architecture, and considerations for the future.

How to Help Injured Wildlife