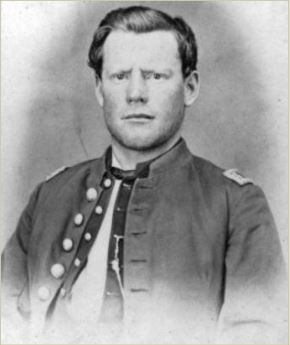 Tomorrow, November 29, is the 153rd anniversary of the Sand Creek Massacre.  That morning, approximately 675 U.S. Volunteers under the command of Colonel John Chivington attacked a peaceful village of Cheyenne and Arapaho Indians, many of whom were women, children, and old men.  Over the next eight hours the soldiers butchered as many as 230 Cheyenne and Arapaho people.  Captain Silas Soule, however, followed his conscience and refused to fire on the unarmed villagers.

After Soule and another soldier, Lt. Joseph A. Cramer, wrote letters to their former commander Lt. Edward “Ned” Wynkoop describing the atrocities, Congress and the U.S. Army investigated and declared what had previously been termed a “battle” was really a terrible massacre.  Coloradans were shocked, Colonel Chivington was disgraced, and Territorial Governor John Evans resigned.  Yet the massacre still had its supporters and, after testifying before the Army Commission, Silas Soule was murdered.  He was just 26 years old.

The Soule and Cramer letters were re-discovered in 2000 and provide a shocking picture of the events of November 29, 1864.  “I tell you Ned it was hard to see little children on their knees have their brains beat out by men professing to be civilized,” Soule wrote.  The tragic story told in the letters led to a greater understanding of what horrors took place that day, and as a result the site in southeast Colorado has been dedicated by the National Park Service as the Sand Creek Massacre National Historic Site.

You can read more about Silas Soule in the Colorado Virtual Library’s mini-biography, or see “Captain Silas S. Soule: A Pioneer Martyr” in the November 1935 issue of Colorado Magazine.  The National Park Service has transcribed Soule’s letter and made it available online.  You can also read more about the discovery of the Soule and Cramer letters in “Written in Blood: The Soule-Cramer Sand Creek Massacre Letters,” an article in the Winter 2001 issue of Colorado Heritage, which you can check out in print from our library.  Other Colorado Magazine and Colorado Heritage articles on Sand Creek include: