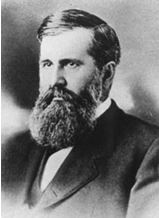 Colorado’s highest mountain bears the name of Samuel H. Elbert, territorial governor of Colorado from 1873-74.  Elbert County is also named for him.
Originally from Ohio, Elbert, a lawyer, moved to Nebraska in 1854 and became heavily involved in Republican politics.  He campaigned hard for Abraham Lincoln and through this campaign met John Evans, future territorial governor of Colorado.  When Evans became governor, Elbert came to Colorado as his territorial secretary, which you can read more about in the Colorado Magazine article “Colorado’s Territorial Secretaries.”  Elbert also married John Evans’ daughter Josephine.  Elbert went on to serve in the territorial legislature.

President Ulysses S. Grant appointed Elbert as governor of the territory after the removal of Edward McCook by public petition.  Elbert was a popular governor, but McCook, a Civil War general, was a friend of Grant’s, so the president reinstated him in office after just one year.

After statehood, Elbert went on to become Chief Justice of the Colorado Supreme Court. He died in 1899.