Continuing our profiles of Colorado’s state-funded higher education institutions, today let’s take a look at one of the oldest – Colorado School of Mines.

Colorado School of Mines is located in Golden, Colorado. Golden had been founded in 1859 and had briefly served as the territorial capital. Soon after, an Episcopal Bishop named George M. Randall founded a higher education campus in Golden that grew to three colleges – Jarvis Hall (1870), Matthews Hall (1872), and a School of Mines (1873). By the 1870s mining was becoming an increasingly important part of Colorado’s economy, so in 1874 the Colorado Territory took over the school, renaming it the Territorial School of Mines. The State Publications Library’s digital collection includes a plan and prospectus for the school from that first year.

Colorado became a state in 1876 and Mines remains a state-run school to this day. It has a student population of around 6,200 and is the most selective of the state-run schools, with an acceptance rate of around 49%. For nearly a century and a half, it has continued in its focus on mining and metallurgy; engineering; and applied sciences. 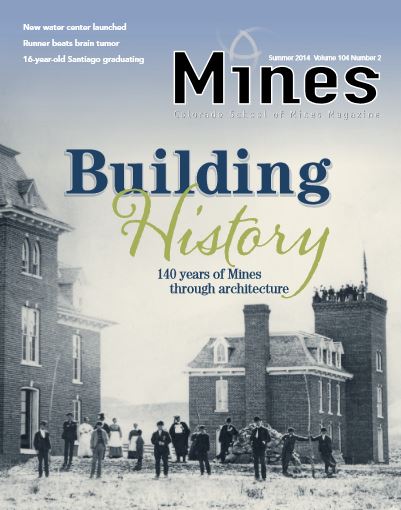 Anyone looking for information on the Colorado School of Mines will find numerous resources in the State Publications Library. The collection includes graduate and undergraduate catalogs; budgets; fact books; and other administrative documents as well as many technical reports and publications about mining, energy, and geology. Most of these are available for checkout in print and can be requested on Prospector. A few interesting historical documents have been digitized, including Geology of Colorado Coal Deposits (1889) by Arthur Lakes, for whom the school’s Arthur Lakes Library is named; and The Extractive Metallurgy of Uranium (1971). The library also has multiple decades of back issues of Mines magazine. For the school’s 140th anniversary in 2014, the magazine published a history of the school and its buildings, which includes some great photos.

Since 2013, Colorado School of Mines has also housed the Colorado Geological Survey. Formerly, the Survey had been under the auspices of the Colorado Department of Natural Resources. Talk surfaced as early as 2004 about moving the Survey to Mines, which the Legislature finally authorized after almost a decade of discussion. Hundreds of Geological Survey publications dating back to 1908 can be accessed from the State Publications Library; some of the titles that have been published since the transfer to Mines include Colorado Mineral and Energy Industry Activities 2016-17; Oil and Gas Wells Map of Colorado; and The West Salt Creek Landslide.

At the Legislature: Animal Protection