Without a doubt, it’s Colorado’s most famous mountain.  And while it’s neither the tallest mountain in Colorado nor the most difficult to scale, Pikes Peak is famous for its visibility from the plains, its use as a symbol of the 1859 Colorado Gold Rush, and for the legendary explorer for whom it is named.

Zebulon Montgomery Pike, a U.S. Army soldier, arrived in present-day Colorado in 1806 to explore the lands that were now a part of the United States as a result of the Louisiana Purchase.  Pike and his men were assigned to search out the source of the Arkansas River.  While on this expedition, Pike spotted what he described as a “small blue cloud” in the distance.  This “cloud” turned out to be the peak that would be named in his honor.  Pike and his men wintered in the area at what came to be known as Pike’s Stockade, and during the long winter Pike set out to explore the peak that had captured his interest.  Perhaps due to the heavy snows, Pike never did climb his peak; fourteen years later, a member of Stephen Long’s Expedition named Edwin James became to be the first to climb it, so the mountain became known as James Peak for a time.*  However, when settlers began pouring into Colorado in the 1850s in search of gold, the mountain was renamed for its early admirer and became a symbol of the Gold Rush.  In fact, “Pike’s Peak or Bust” became the rallying cry for the gold seekers.

According to official rankings, Pikes Peak is Colorado’s 30th highest mountain, at 14,110 feet.  Colorado has 53 “fourteeners.”  The spelling of the name can be confusing.  Since 1890 Pikes Peak has officially been spelled without the possessive apostrophe.  The U.S. Board of Geographic Names has removed nearly all apostrophes from place names for uniformity and ease of signage.  Colorado’s Longs Peak also lacks the apostrophe.

Pikes Peak is also a major tourist attraction.  Visitors not only can hike up the mountain, but also have the option of driving up or taking the famous Pikes Peak Cog Railway.  Pikes Peak and nearby mining towns also make up the Gold Belt Tour Scenic & Historic Byway.

In our library you can find many resources relating to the history, geology, and biology of Pikes Peak.  Resources listed below without hyperlinks can be checked out in print. 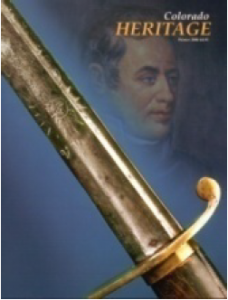 For biographical resources on Zebulon Pike, see the following:

For resources on the Pikes Peak Gold Rush, see

For resources on Pike’s Stockade, see

For other historical information, see

*The Arapaho Indians called it Long Mountain, and Spanish explorers knew it as El Capitán.