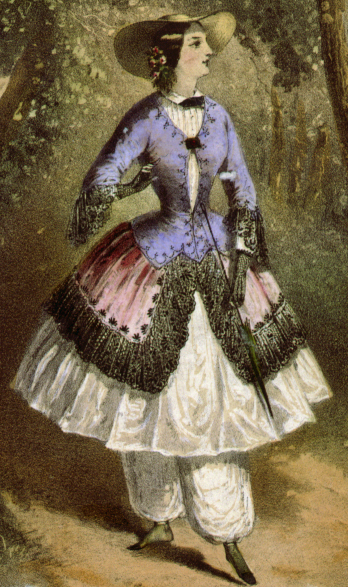 Julia Archibald was born on February 15, 1838 in Nova Scotia, Canada. When she was ten her family moved to the United States and settled in Worcester, Massachusetts. Her father was an abolitionist and her mother was a suffragist. Julia was taught to believe that a woman could do anything a man could do. In 1854 Julia’s father moved the family to the Kansas Territory to join other abolitionists who hoped to have the territory enter the union as a free state. This is where Julia met and married her husband, James Holmes in 1857.

A year after Julia and James got married, they joined a group of gold prospectors heading west to the Rocky Mountains. Once they arrived, the Holmes joined two other men in climbing Pike’s Peak to its summit. To do so, Julia wore a short dress, bloomers and moccasins, an outfit that was considered very indecent at the time.1“The First Ascent of Pike’s Peak.” Out West, June 27, 1872. CHNC While resting on the summit, she decided to write a letter to her mother. In it she stated, “Nearly everyone tried to discourage me from attempting it, but I believed that I should succeed; and now here I am and I feel that I would not have missed this glorious sight for anything at all.”

The Holmes did not manage to find any gold themselves and proceeded south, relocating to Taos, New Mexico. While there, Julia worked as a reporter for the New York Herald Tribune. Julia and James had four children. Her marriage was an unhappy one and she divorced James in 1870 and moved to Washington D.C. While there she immersed herself in the suffrage movement and worked for the Bureau of Education as a Spanish correspondent. She was the first woman to be appointed to the position and eventually became the division chief.  She died January 19, 1887.