“Augmented Reality (AR) is an interactive experience of a real-world environment whereby the objects that reside in the real-world are “augmented” by computer-generated perceptual information.” – Wikipedia

As we talked about in Parts 1 & 2 of this Bag of Tricks series, having resources at your fingertips and a basic familiarity with up-and-coming technology can come in very handy, as well as giving you a bit more confidence.

While I suggest that you create your own Bag of Tricks, I made an example to get you started at https://padlet.com/kieran/CSLSHAREANDLEARN. 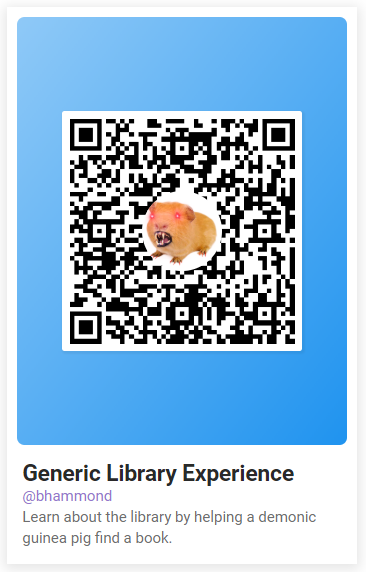 New technology can be a shiny new tool that may or may not further the goals of your library.  While introducing new technology can be good on a patron-by-patron basis, at the community level I prefer to match the right tool for the job. So, when I heard about libraries using augmented reality, I decided it was time to learn more about this tool.

After a bit of research, I found Metaverse. Metaverse is a free Augmented Reality Platform that is being used to build interactive learning experiences.  In short, it allows the user to look through their smartphone camera at their surroundings and see a superimposed icon, picture or cartoon character. For example, you might see my head floating above the circulation desk. The superimposed image can appear based on geographic location – in this case, a specific place in the library. The character can have dialog and ask the viewer to answer questions, like a quiz, or to perform certain tasks that can be evaluated by a computer, such as providing a picture with an associated work, an ISBN, or a barcode.

In about one hour, my coworker and I made the following example, in which you can learn about the library by helping a guinea pig find a bookhttps://studio.gometa.io/landing  (Generic Library Experience by @bhammond) You will need a smartphone to play.

Beside finding books with certain words in the title (as in our demo), what are other ways this could be used in a public library setting?

Where to start if you’re a technology beginner

The Only Diagramming Tool You’ll Ever Need (And It’s Free!)