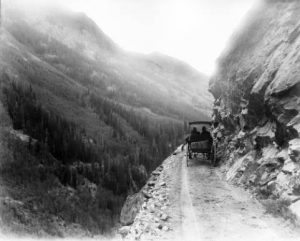 Today we take for granted the fact that highways can take us pretty much anywhere we want to go. But in the first half of the 20th century, that wasn’t the case. As automobiles grew in popularity, the need arose for a system of highways that could support ever-increasing numbers of vehicles. While the construction of highways and interstates has made our life much easier, they haven’t been without problems, whether it’s impact to the environment, or the socioeconomic consequences that occurred in neighborhoods split by highways, forever changing local dynamics.

If you’re researching the history of Colorado’s highway and interstate systems, our library has numerous resources, including historical documents, that tell the story of the transportation system that completely changed our landscapes and ways of life starting in the second half of the 20th century. Search our web catalog for resources. Some highlights from our collection include:

Items without web links can be viewed in or checked out from our library or obtained through Prospector. We also have hundreds of documents pertaining to individual highways/interstates and geographic areas, environmental information, planning documents, research reports, and resources on the history of specific features like the Eisenhower Tunnel, Glenwood Canyon, and the Scenic Byways.