Near Milliken, Colorado is the Dent Site, one of Colorado’s oldest and most significant archaeological sites.  It was discovered in 1932 by a railroad foreman, who spotted some very large bones sticking out of the mud near the railroad tracks.  Construction of the tracks, combined with heavy spring rains, had exposed a site that had been covered since the last ice age.

After the discovery of the site in 1932, Professor Conrad Bilgery of Regis University and curator Jesse Figgins of the Denver Museum of Natural History studied the bones and determined them to be the skeletons of ice age mammoths.  They uncovered five adult female mammoth skeletons along with eight young mammoths. But the most important information yielded at the site was not about mammoths, but about people. Found nearby the mammoths were two Clovis spear points.  These spears were used by people now known as belonging to the Clovis culture, which existed approximately 12,000 years ago. The mammoth bones also showed marks consistent with having been butchered, showing that mammoth was an important part of these early peoples’ diets. 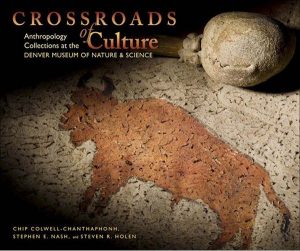 Research at the site resumed in the 1970s through the early 2000s, when new techniques such as radiocarbon dating were used.  Since its discovery, the Dent Site has offered fascinating information on the diets and hunting techniques of some of North America’s earliest human inhabitants, as well as on long-extinct animal species.

The artifacts uncovered at the Dent Site are now part of the collections of the Denver Museum of Nature & Science (formerly the Denver Natural History Museum).  Along with the University Press of Colorado, they published the book Crossroads of Culture, about the museum’s anthropology collections. A copy of this book can be checked out from our library.  Here you will find more on the story of the Dent Site discovery along with photos of the site in 1932 and of the Clovis points that were discovered there.

Another resource available from our library is Frontiers in Paleoindian Archaeology:  From the Dent Site to the Rocky Mountains, also a publication of the University Press of Colorado.

Finally, for many more resources on archaeology and paleontology in Colorado, search our library’s online catalog or see this list of archaeology publications from History Colorado.