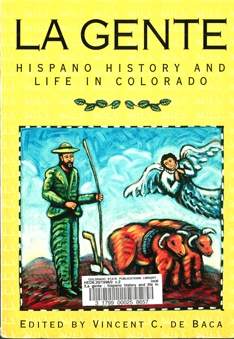 Colorado has always had a significant Hispanic population. Data from the 2020 Census shows that 22% of Colorado’s current population is Hispanic or Latino.

Much of southern Colorado was once part of Spanish territory. Late in the 16th century, Spaniards first entered Colorado. There were many Spanish expeditions across the southwest. One expedition of note is that of Friar Dominguez and Captain Escalante in 1776 mapping the Spanish Trail to California along the Colorado River. A fascinating description of their travels can be found in “The Route of the Dominguez-Escalante expedition, 1776-77” by David E. Miller.

A good summary of the Spanish-Mexican exploration, conquest and settlement of Colorado can be found in “La Gente: Hispano History and Life in Colorado“, edited by Vincent C. De Baca, which can be borrowed from the State Publications Library. The book, published by the Colorado Historical Society, contains many informative essays on the history of Hispanos in Colorado including Los Betabeleros (beet workers), the Colorado Coal Strike, and the Crusade for Justice.

Some additional resources, available from our library, that are useful in researching Colorado’s Hispanic history and culture include: