So begins the recently released investigation report from the Colorado Attorney General’s Office on the Aurora Police Department and Aurora Fire Rescue. 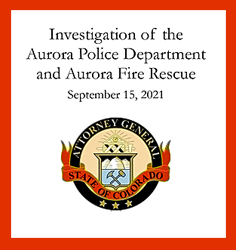 In addition to officer misconduct, findings show that a lack of guidance and failure to communicate expectations for responsible behavior led to the frequent use of force by officers in their interactions with members of the community. Personnel review and discipline systems were deemed ineffective and current hiring practices by Aurora’s Civil Service Commission do not reflect the diversity of the community.

This investigation is just one of many efforts resulting from the Criminal Justice reform efforts by the state of Colorado. In the past two years there have been many bills passed that focus on criminal justice. The Colorado Legislative Council Staff have pulled together a list of the reformative bills in a memorandum: “Criminal Justice Reform Legislation in Colorado: 2013-2021” with the bill numbers and a brief summary for each one.

Three of note that are related to policing:

To find the text of other bills on the list, use the “Search by Bill” feature on the Colorado General Assembly web page.

If you would like dig a little deeper, check out the “Crime & Justice in Colorado 2009-2019” report from the Colorado Department of Public Safety.