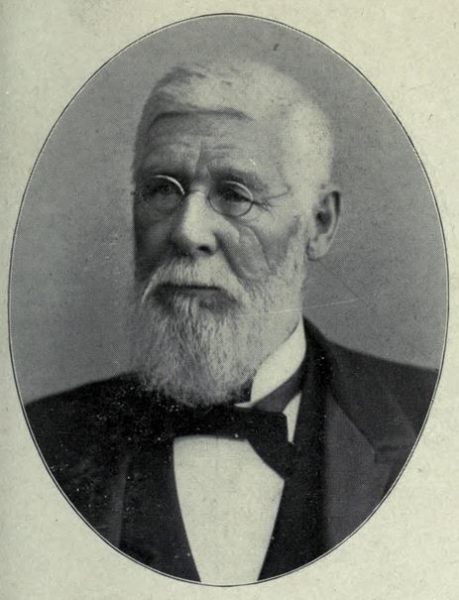 Colorado’s only third-party governor, Davis Hanson Waite, served in office from 1893 to 1895. Waite was a member of the Populist party, which experienced a surge of popularity in Colorado and other western states in the early 1890s.

Davis Waite was born in Jamestown, New York, in 1825. As a young man he moved to Wisconsin, where he became a member of the Republican party and was involved in Abolitionist causes. In 1856, he was elected to the Wisconsin state legislature. He didn’t stay long, however; over the next two decades Waite moved around to several different states, working in the mercantile business, in journalism, and as a teacher while still pursuing his interest in politics. He eventually became a lawyer and moved to Kansas, where he was elected to the state legislature in 1878.

The following year, as Colorado began experiencing a silver boom, Waite and his wife, Celia, moved to Leadville, the silver epicenter of the state. Soon after, however, they moved to Aspen, another mining hotspot. Waite established a successful law practice in Aspen and was eventually made a judge. In 1881-82, he served as Superintendent of Pitkin County schools. He also returned to journalism, establishing the Aspen Union Era, a populist newspaper, in 1891.

The People’s (later Populist) Party had been established in Cincinnati, Ohio, that year, and quickly took hold in Colorado, attracting both Republicans and Democrats who were united on the issue of silver and its importance to the state’s economy, along with other issues like labor rights, women’s suffrage, and election of senators by the people. Davis Waite joined the party and was elected Governor of Colorado in the 1892 election, taking office in January 1893. Well known as an orator, he soon gained his famous nickname, “Bloody Bridles Waite,” after a speech at a silver convention that summer in which he declared that it is “better that blood should flow to the horses’ bridles rather than our national liberties should be destroyed.”

Later that year came one of the most significant events in the state’s economic history, the Crash of 1893. Although Populists out west supported silver, politicians in Washington supported the gold standard. In 1893 the United States repealed the Sherman Silver Purchase Act, under which the federal government had purchased silver for coinage. With the repeal, Colorado’s economy collapsed. Davis Waite presided over the state during this troubled time. It was also during his governorship that Colorado became the first state to vote to approve woman’s suffrage, which Waite supported. (Wyoming was technically first, but Wyoming was a territory, not a state).

But Waite would soon come into controversy. In 1894, he was widely criticized for his role in what came to be known as the “City Hall War,” in which he ordered the state militia to intervene in a dispute over Denver city government appointees. (You can read more about the City Hall War in my previous blog post.) This controversy, combined with labor unrest and with a general feeling of unhappiness about unemployment and the state’s economic conditions, led voters to reject Waite when he ran for re-election in 1894. (At that time, governors served two-year terms). He was defeated by Albert McIntire, a Republican. In January 1895, both men delivered speeches to the Legislature, Waite’s summing up his term while McIntire looked forward to his. These speeches were transcribed and are available to read online from the State Publications Library.

After leaving office, Waite continued in Populist politics, giving speeches and contributing to Populist publications. He died the day before Thanksgiving in 1901, reportedly while helping his wife prepare Thanksgiving dinner.