Continuing our series on Colorado’s chief executives, we now turn to Alva Adams, whose multiple terms as governor were characterized both by success and by controversy. 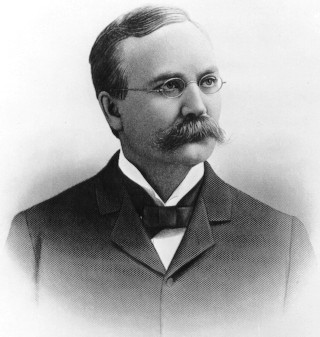 Alva Adams grew up in Wisconsin, where he was born May 14, 1850. In 1871 he moved with his family to Colorado, where his first job was hauling railroad ties for the Denver & Rio Grande. He then moved to Colorado Springs, where he took a job with a lumber and hardware company. Working his way up to owner, he eventually sold the business, opening new hardware businesses in Pueblo and Del Norte. Adams soon accumulated significant wealth by selling lumber and hardware to the railroads.

Now a successful businessman, Adams turned his attention to politics. In 1876 he was elected to the state’s first General Assembly, representing Rio Grande County. Adams, a Democrat, served in the Legislature until 1878, then ran for governor in 1884 but was defeated. At this time, governors served two year terms, and in 1886, Adams gave the race for governor another shot. This time, he won. He was just 36 years old when he was sworn in as governor in January, 1887 (although he was not the state’s youngest governor; James Benton Grant had been 35.)

During Adams’ first term, he became known for his support of labor. He signed legislation establishing the state’s Bureau of Labor Statistics; officially designating Labor Day a state holiday; and outlawing the employment of children under 14 in mines, smelters, and factories.

Adams is also remembered for defusing a potentially volatile situation that arose on the Western Slope in the summer of 1887. Following a small skirmish between Utes and settlers, the whites, fearful of an Indian uprising, implored Adams to call in the National Guard. He did, but soon ordered them to withdraw in order to avoid bloodshed.

Adams opted not to run for a second term in 1889, but returned to politics a decade later for a second gubernatorial bid. Colorado in 1897 was a very different place than it had been in 1887. Colorado’s mining industry had created boom times in the 1880s. But the economy went bust after the Crash of 1893, when, amidst a simultaneous nationwide economic collapse, Colorado suffered an even greater blow when the Federal Government ceased purchasing silver for coinage.

Although by 1897 the economy had started to slowly recover, labor unrest still flared because wages had been reduced in order to keep some of the mines open. When he began his term that year, Adams had to deal with miners’ strikes. While his predecessor, Albert McIntire, had favored sending in the National Guard to quell the strikers, Adams instead looked to find compromise between the mine owners and workers. As a result, his administration created the State Board of Arbitration to deal with labor conflicts.

In 1898, the Spanish-American War broke out. When the U.S. began recruiting infantry and cavalry troops in Colorado, they were housed at Camp Adams — named for the governor — in what is now Denver’s City Park golf course. Adams supported the war effort by raising funds and purchasing identification tags for the troops. After training, the soldiers from Camp Adams were sent to fight in the Philippines. (The book Just Outside of Manila, published by the Colorado Historical Society, tells the story of Colorado’s soldiers in the Spanish-American War. A copy can be checked out from the State Publications Library).

Three Governors in One Day: The Election of 1904

Once again, after serving a single two-year term, Adams chose not to run for re-election. And like before, after being out of politics for a few years, he decided to throw his hat in the ring once again.

In the 1904 election, Adams’ Republican opponent was the incumbent, James Peabody. Despite Adams’ earlier efforts at arbitration, strikes and labor unrest boiled up again under Peabody, who sided with mine owners. Infighting among the state’s Republican party further complicated matters. As a result, the 1904 election was a nasty one, with both parties resorting to fraud and corruption in order to get votes. On the Republican side, mine owners threatened their workers to vote for Peabody or else risk being fired. Meanwhile, the police looked the other way when Democrats in Denver employed “repeaters” to vote multiple times using false names and disguises.

Adams received the greater number of votes and was sworn in as governor on January 10, 1905. Immediately after, Peabody filed a petition with the Secretary of State contesting the election, claiming that Adams’ majority had only been achieved by the large number of illegal votes cast. A Legislative committee was convened to investigate the matter, which heard testimony from more than 2,000 people.

With so much fraud and corruption on both sides, the Legislature decided that neither candidate should be governor. Instead they worked out a scheme in which, given the impossibility of being able to separate the number of legal votes from illegal ones, the contest would be found for Peabody — with the condition that he agree to resign within 24 hours of being sworn in, and not conduct any official business during that time. As a result, on the afternoon of March 16, 1905, after less than two months in office, Adams was unseated and Peabody sworn in. Historian Marjorie Hornbein, whose Colorado Magazine article explores the controversy in detail, noted that both Adams and Peabody “viewed themselves as martyrs for their party and their state.” About 23 hours after being sworn in, Peabody resigned, and Republican Lieutenant Governor Jesse McDonald* took the oath of office. By doing so, that meant that Colorado had officially had three governors in a 24-hour period.

The 1905 controversy doomed Adams’ political career. He ran for governor again in 1906, but was soundly defeated by Republican Henry Buchtel. However Adams’ son, Alva Blanchard Adams, followed his father into politics and served as a U.S. Senator from Colorado in 1923-24 and 1933-41. Governor Adams died of diabetes in 1922 and is buried in Pueblo’s Roselawn Cemetery. Adams County is named for him.

The State Publications Library has digitized copies of several of Adams’ speeches from each of his terms. These include his “biennial message” (what we would call a State of the State speech today) from 1888 and 1899, and his inaugural addresses from 1897 and 1905. The latter also includes remarks by outgoing Governor Peabody. In addition, 14 volumes of reports of the Legislative committee investigating the contested election are available in the library’s collection.

*At that time, Lieutenant Governors were elected separately instead of as running mates to the Governor. That is why McDonald, a Republican, had been serving as Lieutenant under a Democratic governor.

Attracting Hummingbirds to Your Yard or Garden

Attracting Hummingbirds to Your Yard or Garden