Using census data from the past 150 years, the Colorado State Demography Office has prepared two new data visualization tools that demonstrate the places where Colorado residents were born, as well as where people who leave Colorado tend to go. 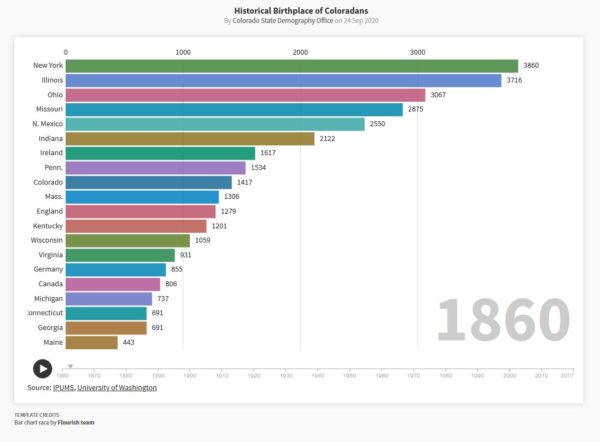 Native Coloradans have long held the belief that most migrants to the state have come from California, Texas, and Illinois. But is this true? Historical Birthplace of Coloradans moves chronologically through the years to rank the states and countries that Coloradoans reported as their birthplace. It is interesting to note the changes over the years. The visualization begins in 1860, when the majority of Coloradans were born in New York, New Mexico, Illinois, Missouri, and Ohio, to more recent decades, where, indeed, California, Texas, and Illinois have had the most migrants, along with the country of Mexico.

A second data visualization graph, Historical Residence of Colorado Born, shows where people born in Colorado tend to move to if they leave the state. Interestingly, throughout Colorado’s history, most of those born in Colorado who head to other states have gone to California, illustrating that the population exchange with that state goes both ways. Other western and midwestern states such as Kansas, Iowa, Washington, Oregon, Wyoming, New Mexico, and Texas have also had greater numbers of migrants from Colorado than eastern U.S. states.