Between last weekend’s wild winds, and the effects of a late freeze in April, this spring has been extra tough on our landscaping here in Colorado!

You may have noticed dead or dying plants, perennials not blooming, and trees leafing out poorly. In most cases this is the result of a combination of an early October freeze last fall and a very late freeze this April. Both freezes followed unusually warm days. Here in Colorado we’re used to erratic freeze-thaw cycles, but this year’s were more dramatic than most. A warmer-than-average early spring caused many plants to begin to bud or sprout, only to have their growth nipped by the freezing temperatures that occurred around April 11-13. If your plants don’t seem quite right this spring, the freeze is probably to blame.

This has also been a bad year for coniferous trees. If you’re seeing dead patches in your pine and spruce trees, especially on their north-facing sides, “winter burn” may have occurred. The Colorado State Forest Service explains, “with warm weather preceding winter last year, the trees did not have the chance to transition into dormancy before freezing occurred. Large shifts in outside temperatures [in April] exacerbated the damage.” Signs to look for include a grizzled appearance, straw-colored foliage, or green needles with rust-colored tips. Unfortunately there’s not much that can be done, says CSFS, except to wait and see what happens to the trees later in the season.

For more information on temperature fluctuations and frost injury to trees and shrubs, see the Colorado State University Extension’s fact sheets on Environmental Disorders of Woody Plants and Evaluating Tree Fruit Bud & Fruit Damage From Cold. Another helpful fact sheet is Colorado Gardening: Challenge for Newcomers, which explains how temperature fluctuations in Colorado affect our gardens. Warmer-than-average spring temperatures, like we saw in March and the beginning of April, can also affect plants. For instance, Fire Blight is a bacterial disease commonly found in trees and shrubs of the rose family, including apple and pear trees, during years with early spring temperatures that frequently reach 65 degrees and above.

Spring weather can also affect our lawns. Many Kentucky bluegrass lawns experience leaf blight when periods of spring rains are followed by long dry periods. If you’re seeing brown patches in your lawn, take a look at the fact sheet Ascochyta Leaf Blight of Turf  for tips on recovery and management.

We’ve also seen some wild weather this past week, with exceptionally high winds in the Denver metro area over the weekend as well as damaging storms on the Eastern plains. If you experienced damage to trees on your property, check out the Colorado State University Extension’s short, helpful video on how to care for storm-damaged trees. Wind can also affect your garden plants. During high wind events, it is helpful to cover young plants to protect them from the wind. Wind that is not accompanied by rain can also have a drying effect, known as “desiccation,” so be sure to consistently water plants, especially those that are still becoming established.

Unusual spring weather has by no means been limited to Colorado this year. Many places around the country experienced cold, wet springs, while other areas had above-average temperatures. While most Atlantic hurricanes and tropical storms form in August and September, tropical storms Arthur, Bertha, and Cristobal hit early this year. Especially unusual was Cristobal, which traveled all the way up to the Great Lakes region, sending a tropical cyclone further northwest than has ever been recorded, according to NOAA. On June 4, researchers at Colorado State University released their annual hurricane forecast, which predicts above-average activity for this hurricane season. 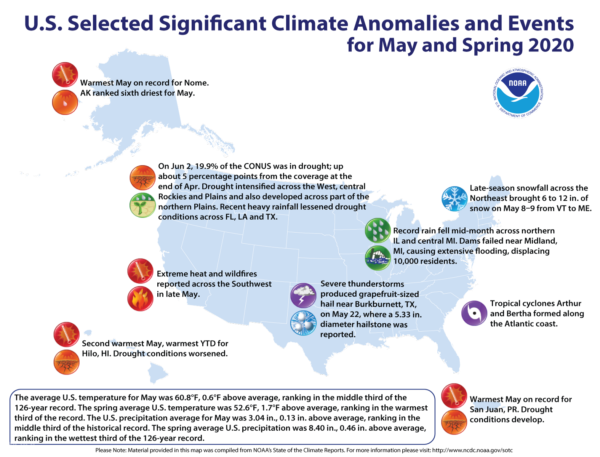