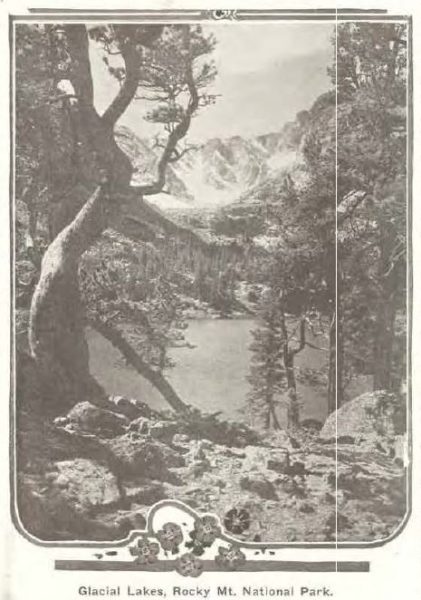 This year marks the 105th anniversary of Rocky Mountain National Park, as well as the 115th anniversary of the original platting of its gateway resort town, Estes Park. For over a century, these scenic locales have been among Colorado’s most famous summer tourist destinations.

Centuries before the establishment of Estes Park and Rocky Mountain National Park (RMNP), the area had been inhabited by Native Americans, particularly the Utes and, by the 1790s, the Arapahos. White settlers began to arrive in the 1860s, the first among them believed to be Joel and Patsy Estes of Kentucky. Rocky Mountain News editor William Byers, early Colorado’s biggest booster and a frequent mountain climber, stayed with the Estes family during a trip to Longs Peak. He called the area “park” because, he believed, it would one day “become a favorite pleasure resort.” A few years later, the Earl of Dunraven visited the area, and he, too, wrote of its possibilities as a tourist destination. 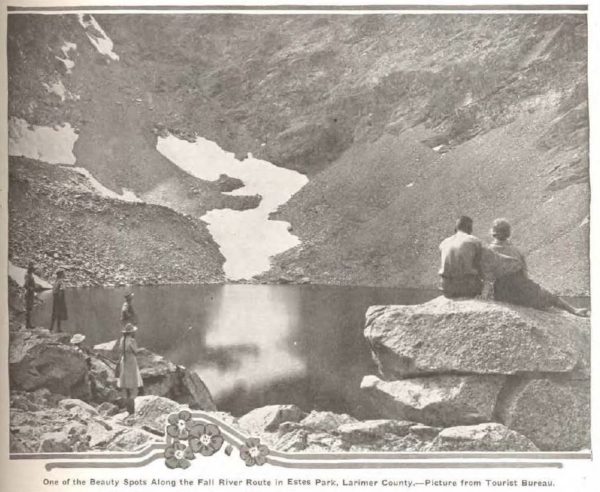 Over the next decades, other homesteaders and ranchers moved to the area. In 1905, one of the settlers, Abner Sprague, platted the Town of Estes Park. Tourists, too, were starting to arrive in greater numbers, aided by that helpful new invention, the automobile. Not only did the automobile usher in a new age of tourism in the United States, but it also played a role in Estes Park’s history. F.O. Stanley, who came to the area for his health in 1903, had made a fortune from his “Stanley Steamer” steam-powered car. Stanley financed much of the infrastructure for the town, even building a power plant to supply electricity. And when he constructed his magnificent Stanley Hotel in 1907-1909, there was no doubt that Estes Park would become the “favorite pleasure resort” that Byers had predicted 45 years earlier. 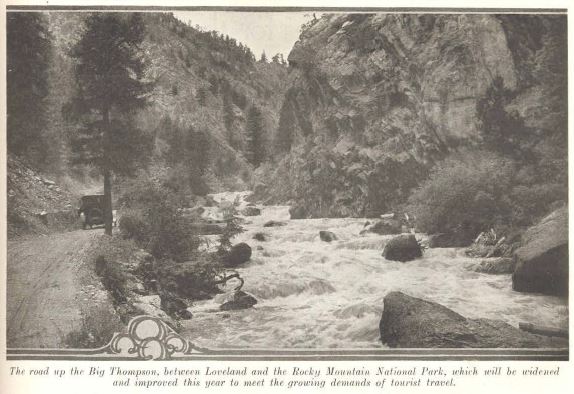 Meanwhile, beginning in 1909, naturalist Enos Mills campaigned for the creation of a National Park in the area. Rallying the support of local residents and civic leaders, Mills’ efforts finally paid off when Rocky Mountain National Park was created on January 26, 1915. Roads, trails, and park facilities were constructed in the coming years. Colorado Highways Bulletin, a monthly magazine from the Colorado Department of Highways, tracked the progress of early RMNP-area roads such as the Fall River Road and the Big Thompson Road. The park’s most famous drive, Trail Ridge Road, would be constructed by the Civilian Conservation Corps in the 1930s. In 1954 an official state tourism brochure, Cool, Colorful Colorado Invites You!, promoted Estes Park and RMNP in one of its featured driving tours. Today, Trail Ridge Road has been designated both a Colorado Byway and a National Scenic Byway, attaining the program’s highest designation, All-American Road, in 1996. 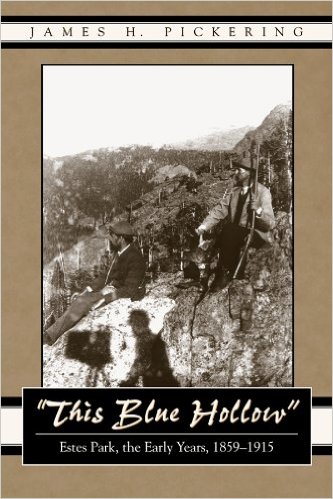 If you’re interested in reading more about the history of Estes Park and RMNP, some excellent resources are available for checkout from the State Publications Library, including these University Press of Colorado titles:

The library also has numerous resources on Estes Park and RMNP’s natural resources and tourism; search the catalog for titles.