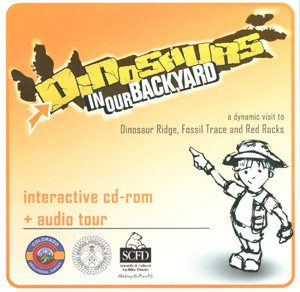 While we don’t have volcanoes in Colorado today, volcanoes certainly played a role in the geological formation of the area.  Evidence of volcanoes can be found as close to Denver as Dinosaur Ridge.  In the Colorado Geological Survey’s Dinosaurs in Our Backyard:  A Dynamic Visit to Dinosaur Ridge, Fossil Trace and Red Rocks – Interactive CD-Rom and Audio Tour, available for checkout from our library, the narrator describes the evidence of volcanoes at this prehistory-rich site just west of Denver:

During the deposition of the Dakota formation, volcanoes north and west of here were spewing ash into the Colorado sky.  A layer of white ash from one of these volcanic eruptions is visible at this site.  This ash contained radioactive uranium elements, which slowly changed to lead over time.  By comparing the ratio of radioactive uranium to lead today, scientists from the United States Geological Survey were able to determine the age of the ash and the surrounding rock layers to be 106 million years old.

The San Juan Mountains of southwestern Colorado also show evidence of volcanic activity.  This is described in a chapter of the University Press of Colorado book The Western San Juan Mountains:  Their Geology, Ecology, and Human History, also available for checkout from our library.  “The San Juan volcanic field is part of a much larger volcanic region that was active throughout the Southern Rocky Mountains from about 40 million to 18 million years ago.  The volcanic activity…produced lavas and pyroclastic debris that covered all of south-central Colorado and the north-central part of New Mexico,” according to the book.

Colorado’s neighboring states have even more significant associations with volcanic activity.  New Mexico is home to the large Valles Caldera, which you can read about in the Colorado Geological Survey’s Field Trip Guide to the Quaternary Valles Caldera and Pliocene Cerros del Rio Volcanic Field.  The most likely place for a volcano to occur in the future near Colorado, however, is to the north of us, in Yellowstone National Park which is known for its geothermal activity.