Victor, Colorado, near Cripple Creek in Teller County, is one of Colorado’s most historic mining towns. Incorporated in 1894, Victor flourished during the gold mining era that followed the Silver Crash of 1893. The repeal of the Sherman Silver Purchase Act meant that silver mining, which had been a huge part of Colorado’s economy, was no longer profitable. So mining interests instead turned to the gold mines, and the Cripple Creek District became the heart of Colorado gold mining. Victor reached a peak population of about 12,000 at the turn of the century, making it, for a time, one of the largest cities in Colorado.

Victor’s first period of labor unrest occurred in 1894. That year, striking miners demanded a minimum daily wage of $3.00 and an eight-hour workday. The issue was resolved in favor of the miners, but in 1903 the miners again went on strike after mine owners quit honoring the agreement. Nearly 4,000 miners walked off the job under the direction of labor leader “Big Bill” Haywood. Working with the Western Federation of Miners, the strikers managed to shut down several mines, but when the mining companies brought in strikebreakers and “scabs,” violence ensued.

At the Vindicator Mine, two non-union replacement workers, or “scabs,” were killed when striking miners set off explosives in the mine. Then, on January 27, 1904, fifteen men were killed and another man seriously injured when an elevator cable inside the Independence Mine was sabotaged, causing the miners to fall to their deaths. Following the two incidents, Governor James Peabody declared martial law and ordered the state militia to quell the strike. “Striking miners were arrested and detained in bull pens,” according to an article in the Colorado Encyclopedia, and “the entire staff of the Victor Daily Record was arrested after printing an anti-mine owners editorial.”

The militia withdrew in the spring of 1904 and violence started up again. Striking miners bombed a train depot in the nearby town of Independence, killing thirteen more nonunion workers. It took several more years of unrest before the strike was finally settled in 1907.

In their 1904 report, the State Commissioner of Mines reported on the deadly incidents at the Vindicator and Independence Mines, referring to both as “accidents” but acknowledging that the Independence Mine incident “was caused by premeditated plan executed by someone unknown.” The report contains not only the Commissioner’s official report of the incident, but also reprints correspondence from the State Attorney General to Governor Peabody regarding the matter along with the official report of a Board of Inquiry that looked into the elevator incident. The Board of Inquiry and the Attorney General recommended a study of new safety devices for mine elevator shafts, and the report includes several illustrations of pulley devices proposed for study.

The report, which has been digitized by our library and is now available online, is a significant primary source document now available to scholars researching the history of Colorado mining and associated labor struggles. The 1904 report is part of a series of annual and biennial reports that were produced by the State Bureau of Mines and have been digitized by our library; reports from 1894 through 1965 are available online. Search our library’s online catalog for more resources, both primary and secondary, that tell the story of mining and labor history in Colorado. 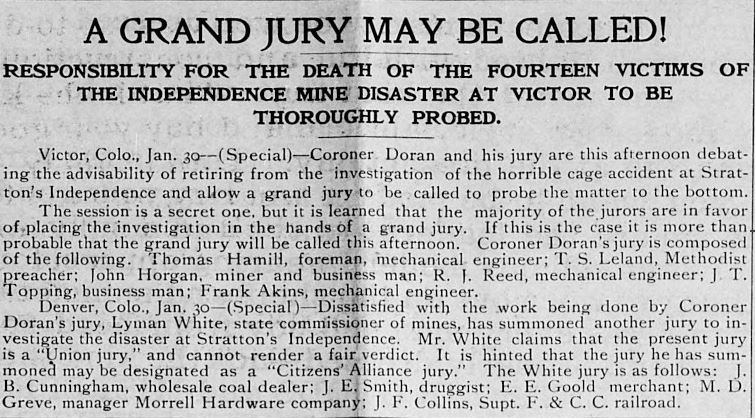