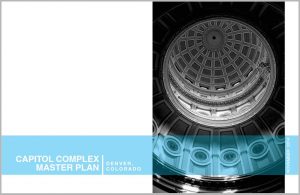 What is the State of Colorado’s vision for the future of its buildings?  Although sometimes overlooked, buildings are one of the state government’s most important assets.  Running the government requires offices and a Capitol building.  Colleges and universities couldn’t exist without classrooms, libraries, labs, athletic facilities, and community spaces.  So maintaining these structures – and building and acquiring new ones as our state’s population grows – require significant planning.  The various “campuses” of state buildings – including higher education campuses and the Capitol Complex – have developed Master Plans that include building inventories, maintenance needs, new development, and projected associated costs.  Many of these Master Plans are available from our library: