It can’t really be called a ghost town, because there’s almost nothing left to mark the location of Caribou, Colorado, a silver mining town once located in Boulder County near Nederland. Yet despite being nearly forgotten, the town of Caribou and its associated silver mines were a shining example of the boom-and-bust cycle of the mining West. 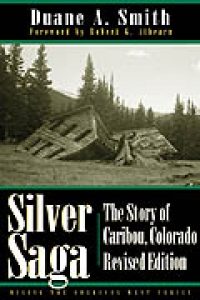 The silver mines at Caribou were established in 1869 and by the following year a townsite had been platted.  It was a cold, windy place to live, but nonetheless the miners and their families made it their home. Historian Duane A. Smith, in his highly readable Silver Saga: The Story of Caribou, Colorado, points out that the people of Caribou were civil and law-abiding; this was no rowdy Leadville or Deadwood.  Many of Caribou’s inhabitants were families, and the schoolhouse was one of the town’s most prominent and recognizable buildings.  A significant number of Caribou residents were Cornish miners who brought their mining and cultural traditions from their native Cornwall in Britain.

The silver mines that gave rise to the town were initially very productive, but as time went on, the best ore was tapped out.  A host of well-known individuals were associated with the ownership of the Caribou mines, including Jerome Chaffee and David Moffat.  One longtime owner was New York financier R. G. Dun, best known today as the Dun of Dun & Bradstreet.  By the time Dun died in 1900, he had experienced major financial losses from the mine.  The mine had already been decreasing in production by the time of the Silver Crash in 1893, and several times over the years it had been closed and re-opened.  Financial problems, water issues, and low-grade ore all contributed to the mines’ performing less than expected.

Caribou’s population, at its height in the mid-1870s, steadily dwindled as the decades passed.  In the mid-1880s, several especially hard winters and even an earthquake challenged the residents’ resolve.  After the 1893 panic, even more residents left.  Finally, in 1905, a major fire destroyed most of the town’s buildings, and the few that remained were abandoned.  The high winds and heavy snows eventually toppled these few reminders that a thriving town had once been there.

Even though the town was gone, mining at Caribou wasn’t completely dead.  The Biennial Report of the Bureau of Mines of the State of Colorado for 1917-18 reported that “in the Caribou mining district there has been a great revival in 1918.”  Apparently this “revival” didn’t last long, and there wouldn’t be another one for several decades.  The 1952 report noted that “Boulder County’s production of silver, the largest since 1917, came mostly from the Consolidated Caribou Mines, Incorporated.”  The district saw a second, smaller revival in the 1970s when a gold mine was opened but, in keeping with its history, troubles still plague the mine today.

Smith’s Silver Saga, which can be checked out from our library, tells the whole story of the ups and downs of the mine and the town.  Ghost town enthusiasts should also read Waldo R. Wedel’s “Visit to Caribou, 1963,” in the Summer 1964 issue of Colorado Magazine.  In the 54 years that have since passed, very little of what Wedel describes can still be found.  And while human inhabitants may have long since left the area, Caribou is still home to a number of species of rare plants and animals, as detailed in a 1999 report from Colorado State University’s Natural Heritage Program and Boulder Open Space.