In the nineteenth and early twentieth century, mining was one of the state’s top industries, employing thousands of workers. Yet every day, each of these workers entered the mines not knowing if they would ever return. Mining was an extremely dangerous job, and hundreds of workers paid the price with their lives.

Because of the dangers faced by mine workers, the State of Colorado enacted laws and regulations to require certain safety measures be undertaken. Many of these were made possible by new technology. Electricity began to replace candles for lighting in mines, for example, in the 1880s. And by 1920, the State required that “all mines should have telephone connection with the nearest doctor.” Yet technology couldn’t solve all of the risks associated with mining, and unfortunately, accidents were common. Labor disputes often arose as miners fought for better working conditions.

In 1883, the Colorado General Assembly passed legislation to regulate the inspection of coal mines. However, the following year, fifty-nine miners were killed in a gas explosion in a mine near Crested Butte. In response, the legislature amended the law to require stricter safety measures, including daily safety inspections, limits on child labor, and detailed recordkeeping. The Act also required all mine injuries and fatalities be reported to the State Coal Mine Inspector and included in his Annual or Biennial Reports. These reports, spanning eighty years, can be viewed online from our library.

Accidents most certainly didn’t end there, though. Colorado’s deadliest mine accident occurred on April 27, 1917, when an explosion in the Hastings Mine in Las Animas County killed 121, including a mine inspector and a rescue worker. In the year 1910 alone, 220 miners were killed in four separate incidents. Other large-scale disasters included two explosions at the Vulcan Mine in Garfield County, in 1896 and 1913, which claimed forty-nine and thirty-seven lives, respectively; a gas explosion at the Wadge Mine in Routt County in 1942, which killed thirty-four; and the 1889 White Ash Mine disaster near Golden, where a collapse and resulting flood caused ten miners to drown. Numerous other mining accidents claimed individual workers. Denver Public Library has compiled a list of Colorado mining fatalities that occurred from 1884 through 1963, including a summary of major mine disasters. 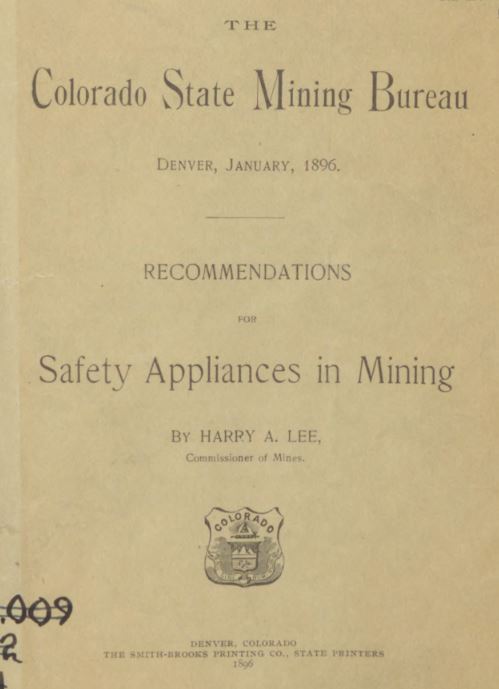 Historians and others researching the history of mine safety laws, regulations, and practices in Colorado will find many useful resources in our library. Among these are the aforementioned coal mine inspection reports, as well as the reports of the Colorado Bureau of Mines and the reports of the Industrial Commission of Colorado. The latter reports list the workers compensation claims put before the state. For instance, claims on behalf of the miners lost in the Hastings explosion can be found in the 1917 report. In most cases, the miners’ families were awarded stipends of $8.00 per week for six years.

We have also recently digitized several reports that specifically address mine safety regulations and requirements. These include Recommendations for Safety Appliances in Mining, 1896; Regulations Relative to the Construction, Equipment and Operation of Metalliferous Mines, Mills and Metallurgical Plants, 1905; Mine Safety Standards, 1920; and Colorado Mining Laws with Safety and Health Rules and Regulations, 1971 (1954 and 1976 editions are also available from our library for checkout in hardcopy). Several publications from the Colorado School of Mines are also available for checkout, including Cost of Safety and Health Regulations at Selected Western Coal Mines (1980) and A Manual on Mines Rescue, Safety, and Gas Detection (1990). For additional resources on mining in Colorado, search our library’s online catalog; also, see the Auraria Library’s Colorado Mining History Resource Guide; History Colorado’s Mines and Mining bibliography; and CU-Boulder’s Colorado Coal Project, a digital archive of historic photos and miners’ oral histories. Additionally, the library at Colorado School of Mines has created a mine accidents guide which includes an index of mine accidents.

Today, mine safety is regulated by the Colorado Division of Reclamation, Mining and Safety.

The history of Chinese and Japanese Americans in Colorado