Ice cream — it’s one of America’s favorite summer traditions. July is National Ice Cream Month and it was on this day in 1904 that the first ice cream cone debuted at the St. Louis World’s Fair. And, (who knew?) today is also Sprinkle Day. 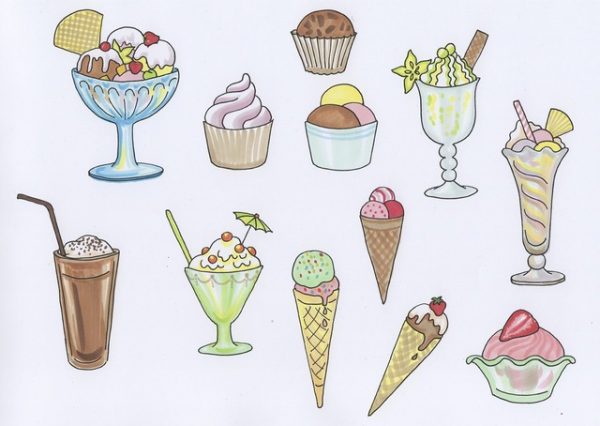 Iced desserts date back to ancient times, and the idea of adding dairy cream to iced desserts came about in Europe in the 16th century. Here in America, ice cream was a rare and exotic treat until the late nineteenth century, when refrigerated warehouses, mechanical refrigeration, motorized delivery vehicles, and other technologies were introduced that made ice cream more easily attainable. Initially, ice cream had mostly been available at restaurants and soda fountains, but as home refrigeration systems grew more widespread, ice cream became a popular option for dessert at home. In fact, in 1930 the Colorado Agricultural College Extension published Simple Desserts, a booklet of ideas for serving easy desserts like ice cream, pudding, and custards. It gives ideas for meal pairings as well as recipes for sauces like butterscotch and caramel.

In 1959, the Colorado Legislature passed the “Colorado Frozen Desserts Act,” specifying standards for the manufacture of ice cream. The standards still exist in today’s laws, under 25-5.5-303 of the Colorado Revised Statutes.

If you’re looking to sample some homemade-style ice cream, see the 2019 Farm Fresh Directory to find farmer’s markets that have ice cream for sale.