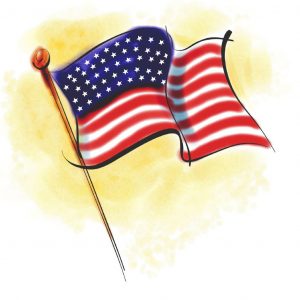 Today is Flag Day, celebrated annually on June 14.  Flag Day also celebrates a 100th anniversary milestone this year; it was officially established by proclamation of Woodrow Wilson in 1916.  Long before the official government commemoration, various unofficial “flag days” had been celebrated in locations around the country since after the Civil War.  The first official celebration of a flag day on June 14 was in Philadelphia in 1892.  (June 14 is the anniversary of the adoption of the stars and stripes in 1777).  Soon after, other states began commemorating Flag Day, especially in the schools.

Here in Colorado, Flag Day was first celebrated in 1894 in Denver through the suggestion of the local chapter of the Sons of the Revolution.  It was proclaimed a legal holiday in Colorado in 1901.  An example of Colorado’s Flag Day sentiments can be found in Governor Jesse McDonald’s 1905 Flag Day proclamation:

“Those stars and stripes represent the struggle and achievements of our fathers and mothers unto far distant generations.  The sheltering folds of that flag will furnish ever increasing protection to those who are striving for equality and justice, to the honest and legitimately ambitious millions who desire a pure government of, for, and by the people…let us of Colorado observe Wednesday, June 14, 1905, as Flag Day, and appropriately observe that day in our homes, places of business, and public gatherings, but more especially in the schools, where a new generation is preparing to assume the responsibilities of life.”
The full proclamation can be found on page 110 of the 1905 Report of the State Superintendent of Public Instruction, which has been digitized by our library.  The report also includes numerous pages of songs, poems, and recitations that teachers could use to teach students about patriotism and the flag.  Interestingly, by 1909 the Flag Day curriculum ideas were no longer published in the superintendent’s reports, probably because many schools were not in session during the summer.  However, in the 1910s the Superintendent of Public Instruction began publishing a Book of Holidays, which can be found in our library’s collection.  These books included curriculum suggestions for holidays throughout the year, including Flag Day.