You may be familiar with the Eugene Field branch of the Denver Public Library, but have you ever wondered, who was Eugene Field? And what was his connection to Colorado?

Eugene Field is best known for his poems for children, such as “Wynken, Blynken and Nod.” He was also a nationally famous newspaper writer and humorist. Field was born in St. Louis, Missouri, in 1850. His father was a well-known lawyer who had represented Dred Scott in the famous Dred Scott case of 1857. Eugene spent most of his childhood in Massachusetts, eventually returning to Missouri to study journalism, although he failed to earn his college diploma. He began his career in journalism by writing for several St. Louis papers.

In 1881, Field was offered the job of editing the Denver Tribune. He and his family moved to Denver, where they rented a small cottage at 315 West Colfax Avenue. Field was known as a great practical joker, and he used his gossip columns to poke fun at Denver and its residents. “More often than not his jokes had a cruel point, but everyone in town laughed, except the victim,” wrote Edgar C. McMechen in the State Historical and Natural History Society’s five-volume History of Colorado (1927), which has been digitized by our library. McMechen is generally critical of Field, noting that “Field’s importance in Colorado is that of personality rather than accomplishment,” and that his satirical writing inaccurately portrayed life in the western states. Another publication available from our library, however, is more sympathetic. A Book of Holidays 1913-14 from the Colorado Department of Public Instruction provides a few paragraphs, written for children, about Field’s life. One of his poems, “Some Time,” an emotional ode to the enduring love of a parent for their child, is provided as well.

Field and his wife, Julia, had eight children of their own. The Book of Holidays tells of Field’s fondness of children, although a biography from Denver Public Library suggests that “While Eugene loved being a father, he admitted he didn’t like children that weren’t his own. In fact, more than once he was caught making scary faces at children when he thought their parents weren’t looking.” Whatever his feelings, Field’s children’s poems became his most famous works. Another example of his poems for children, “The Wren’s Nest,” can be found in one of the Department of Public Instruction’s other holiday books, this one from Arbor Day 1911.

Field only lived in Colorado for two years. In 1883 he moved his family to Chicago, where he wrote a gossip and humor column called “Sharps and Flats” for the Chicago Morning News. Like in Denver, Field’s Chicago column specialized in satirizing the city and its residents. During this time, Field also published several books of poems. In 1895, at the age of 45, Field was found dead in his home, apparently of an undiagnosed heart condition. The Pueblo Chieftain article “A Poet of the West,” discussing Field and his time in Colorado, was published just following the writer’s death and can be viewed online from the Colorado Historical Newspapers Collection.

In 1927, Margaret “Molly” Brown, a great admirer of Field’s poetry, purchased the Colfax Avenue cottage and donated it to the City of Denver. The cottage was moved to 715 South Franklin Street in Washington Park, where it housed the original Eugene Field branch library until a larger library was constructed in 1970. Later used by nonprofit groups, the cottage still stands in the park, near Mabel Landrum Torrey’s sculpture of Wynken, Blynken, and Nod. 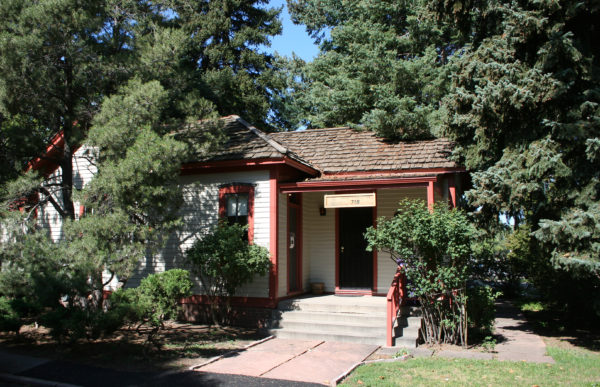