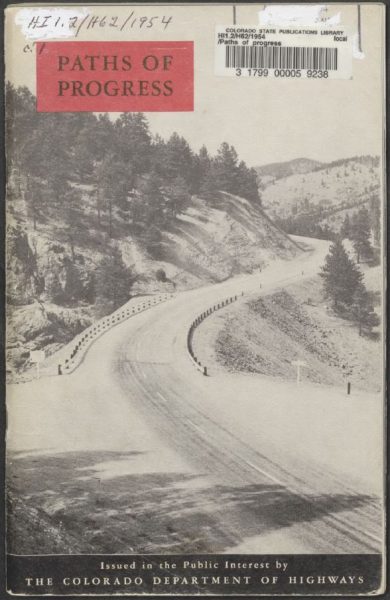 New to our library’s digital collection are two historical publications that tell the story of the development of Colorado transportation over the past century. Paths of Progress was published by the state highway department around 1954. Tracing the state’s transportation from Indian trails to interstates, the publication features some great photos of early transportation in Colorado. For the state’s Centennial-Bicentennial celebrations in 1976, the department released The High Road, which digs deeper into the early history of the development of the state’s highways. These and numerous other publications available from our library tell the story of Colorado’s transportation system over the past century.

Automobiles first appeared in Colorado around 1899, when David Brunton – thought to be the first person in Colorado to own an automobile – debuted his newfangled contraption on the streets of Denver. Enough other people were buying them, however, that in 1902, according to Paths of Progress, “Denver’s first 42 auto owners formed the Colorado Automobile Club and began the 20th century’s campaign for wider, safer, faster roads.” Members of the automobile club formed the Good Roads Association in 1905, which advocated for the formation of a State Highway Commission. This was approved by the State Legislature in 1909, and the biennial reports of their activities have also been digitized by our library.

1913 was an important year for Colorado transportation. The Highway Commission was reorganized and the General Assembly passed legislation requiring vehicle registration, using the fees to support highway projects around the state. The issuing of license plates to registered vehicles also began that year. Colorado’s first license plate featured black letters on a white background.

In the 1910s and ’20s, more people were buying automobiles and using them to tour the state. Wolf Creek Pass, the “Million Dollar Highway,” Loveland Pass, and the Mt. Evans Highway were some of the early tourist roads constructed in those decades. 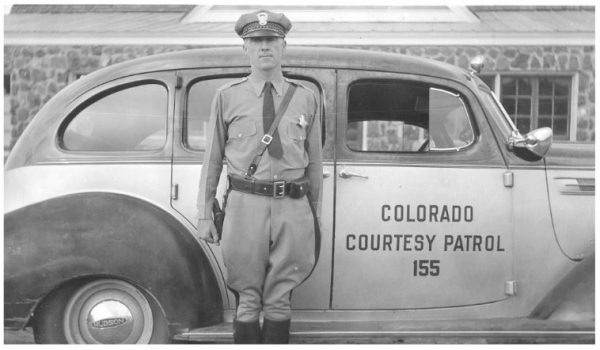 During the Great Depression of the 1930s, federal work programs continued the construction and maintenance of Colorado’s highways. In the midst of these difficult economic times, 7,500 men applied to the new Colorado State Courtesy Patrol that was created in 1935; just 44 applicants were selected. According to First in Traffic Safety, a 2004 profile of the State Patrol, the earliest officers faced some unique challenges. Patrol cars weren’t equipped with two-way radios until 1949, so in earlier years, dispatchers would phone the local filling stations along an officer’s route; attendants alerted the patrolmen by placing red flags along the roadways. The Courtesy Patrol was renamed the Colorado State Patrol in 1947, and in 1984 it was transferred from the Department of Highways to the newly-formed Department of Public Safety. 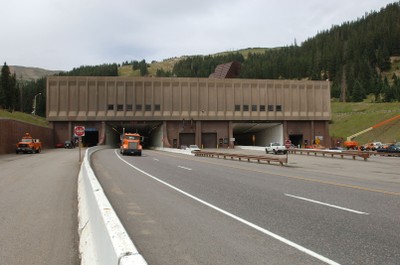 Development of Colorado’s highways greatly expanded after WWII. The Federal Government approved interstate highways that became I-25, I-70, and I-80S (renamed I-76 in the 1976 statehood centennial). There were a number of engineering feats in the late 20th century, such as the Eisenhower-Johnson Tunnels and the Glenwood Canyon project. In 1991 the Department of Highways became the Colorado Department of Transportation (CDOT), and the state’s largest transportation construction project, “T-Rex,” was completed between 1999 and 2006. Today, CDOT continues to expand Colorado’s highway system with projects like the I-70 East expansion, and is also working on developing new systems and technologies.

Continuing the stories begun in Paths of Progress and The High Road, CDOT published 100 Years of State Transportation History in 2010. This full-color book can be borrowed from our library or through Prospector. For more reports and publications on Colorado’s highways through the years, search our library catalog.