What was it like to travel around Colorado before I-25, I-70, and the other major highways?  Colorado had a network of smaller roadways — which probably allowed visitors a more scenic view of the state than we have today!  The Colorado Department of Transportation has digitized a number of its old state maps, which have been cataloged and are available from our library.  The digitized maps go back to 1942.  Not only are these maps of roads and highways, but the full-color maps also give suggestions for points of interest along the routes.  The maps also contain mileage tables, information on National Parks, Monuments, and Forests, a list of mountain passes, and a list of the state’s highest peaks.  Some years also include topographical information.  Experience traveling in days gone by with these fun maps! 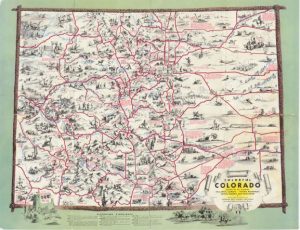