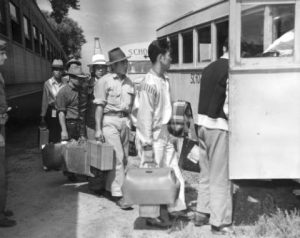 In February 1942, during the height of WWII, President Roosevelt signed Executive Order 9066, ordering the relocation and internment of Americans of Japanese ancestry.  Many believed that Japanese Americans were loyal to their ancestral home and would be a security risk.  This attitude can be seen in the remarks of Dr. Heber R. Harper, a federal health official in Colorado:  “in Japan…the cause is more closely allied to religion and a unique religious fanaticism.  Whether Nazi Germany or Japan is our great enemy, the morale of the Japanese may be much harder to break than that of the Germans.”  Harper’s remarks, and others that attest to the attitudes of the times, appear in Civilian and Community Morale Through Understanding and Participation, a report of an assembly held at the Colorado State Capitol just two days prior to the issuance of the President’s Executive Order. 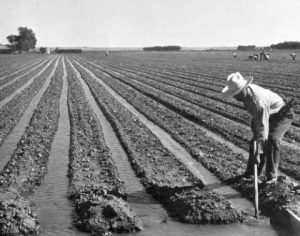 As a result of the order, Japanese Americans were forcibly removed from their homes and sent to ten internment camps set up across sparsely-populated areas of the American West.  One of these ten camps was Amache (officially the Granada Relocation Center) near the town of Granada in extreme southeastern Colorado.  Forced to live in military-style barracks, relocatees faced a difficult life.  Cold in winter and hot in summer, the camps were surrounded by fences and armed guards.  Although children and teenagers were given the opportunity to attend school, most adults had to work in low-paying, labor-intensive jobs.  The government encouraged farming, but due to the arid conditions of the area, this proved difficult. (See Land Types in Eastern Colorado, published in 1944, for a description of farming in the area during that time period).  You can read about life in Amache in this 1964 article from Colorado Magazine.  Other articles about Amache can be found in the Spring 1989, Winter 2005, and Autumn 2007 issues of Colorado Heritage, available for checkout in print from our library.  History Colorado, the publisher of Colorado Heritage, has also produced an online exhibit about Amache. 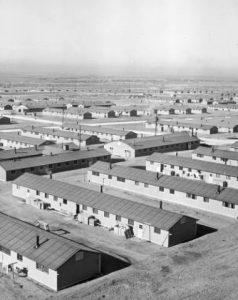 A 1943 report on public welfare in Colorado, available online from our library, takes a look at the internment’s effect on social services in a section called “The Japanese Problem.”  However, not everyone in government believed in the Japanese relocation concept.  Colorado’s Governor Ralph Carr is remembered as one who stood up for the Japanese.

Today, very little physical evidence is left of the Amache site, but it has not been forgotten.  Descendants hold an annual pilgrimage to Amache.  The site contains a museum and a cemetery, and visitors can take a driving tour with podcasts to guide them.  Numerous archaeological investigations are being undertaken on the site, and for more than 20 years students at Granada High School have done projects to assist with the preservation of Amache. 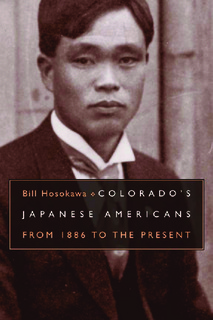