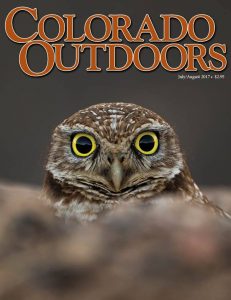 The July/August issue of Colorado Outdoors magazine features burrowing owls.  These fascinating creatures are much different than the tree-dwelling owls most of us are all familiar with.  Burrowing owls, as suggested by their name, are ground dwellers.  Unlike most owls, which live in forested areas, burrowing owls spend the summer on Colorado’s eastern plains, where they live in prairie dog towns.

Burrowing owls also differ from most other owls in that they are diurnal (active during the day) and they are also smaller than most other owl species (and cuter!).  The owls mostly feed on insects, particularly grasshoppers and beetles, but they will also sometimes eat mice and small reptiles and amphibians.

Although burrowing owls migrate to Arizona, California, Texas, and northern Mexico in the winter, they are considered a threatened species in Colorado, their summer home, because of the elimination of much of their natural habitat.  Eradication of prairie dogs by humans has had an adverse effect on burrowing owls, illustrating the importance of understanding how Colorado’s different wildlife species affect one another.  Recommended Survey Protocol and Actions to Protect Nesting Burrowing Owls When Conducting Prairie Dog Control, a Colorado Division of Wildlife publication available from our library, addresses this issue.

In addition to the above-named resources, you can also find information on burrowing owls in several other Division of Wildlife publications available from our library, including The Little Owls and Conservation Plan for Grassland Species of Colorado.  See also Colorado Parks & Wildlife’s species profile for more information and links.