New to the library’s digital collection is Denver’s Historic Markers, Memorials, Statues, and Parks (1959). But even more interesting than the publication itself is the story of its author, Agnes Wright Spring, Colorado’s first female State Historian and the only person – male or female – to serve as State Historian of more than one state. 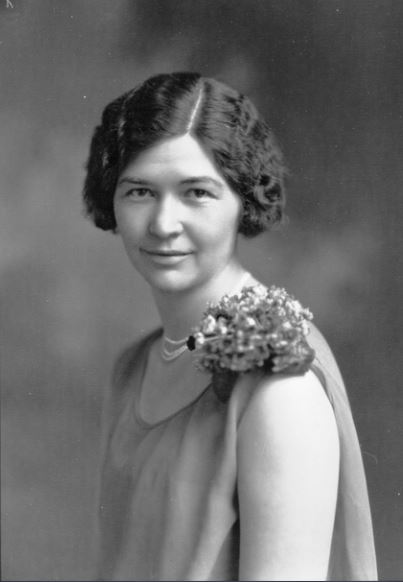 Agnes Wright Spring was born in Delta, Colorado, in 1894. While Agnes was still a young child, her father bought a ranch near Laramie, Wyoming, where the family ran a stagecoach stop. Education was an important value in the Wright family, and Agnes’s dream was to become a mapmaker. In 1913, she became the first female to earn a degree in civil engineering from the University of Wyoming. However, a job in the college library changed the course of her career, helping her to realize that she loved research, writing, and history.

Agnes continued library work after college, when she was hired by the Supreme Court Library in Cheyenne. In 1916 Agnes received a scholarship to study journalism at Columbia University in New York, and while she was there, she joined the women’s suffrage movement (women in Wyoming and Colorado already had the vote). She never finished her degree, however. Returning west, she was hired as Wyoming’s State Librarian in 1917. A year later, she took on the additional title of State Historian, a position which was at that time connected to the office of the State Librarian.

Agnes left the twin Wyoming positions when she married Archer “Archie” Spring in 1921, moving with him to to Fort Collins, Colorado. It was during the 1920s that Agnes established her writing career, freelancing for numerous publications and publishing her first book in 1927. Over her lifetime, she would publish 22 books and hundreds of articles and stories.

The Great Depression became another event that altered the course of Agnes’s life. She and Archie, a geologist who worked in the oil business, had tried operating an orchard near Fort Collins, but the Depression and drought caused them to lose the property. Agnes went to work for the Works Progress Administration (WPA), supervising the Federal Writers’ Project in Wyoming from 1938 to 1941. In this position, she oversaw the publication of the WPA Guide to Wyoming and several other guidebooks. After the project was disbanded, the Springs moved to Denver, where for several years Agnes held a position at the Denver Public Library. In 1950, Agnes went to work for the Colorado Historical Society, where she served for a year as Acting State Historian. Later she was promoted to official State Historian, serving from 1954 to 1963. 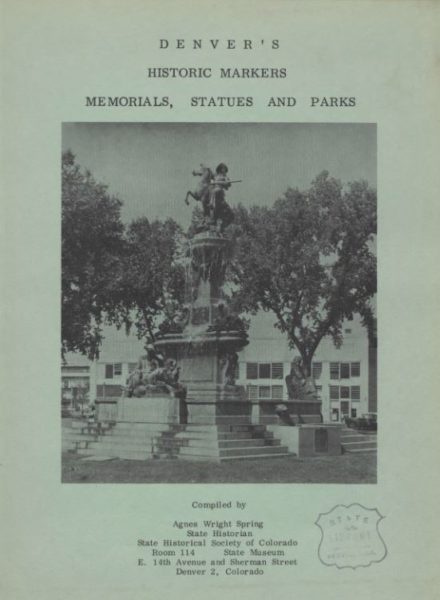 It was during this period that Agnes compiled Denver’s Historic Markers, Memorials, Statues, and Parks, which is now available to view online from the State Publications Library. This publication provides a listing and short description of the various historic markers and monuments commemorating Denver’s history found throughout the city. Most of these monuments can still be visited today. Agnes also wrote several articles for Colorado Magazine, including histories of the 1859 Gold Rush; the military post at Fort Collins; and – continuing her interest in monuments – Colorado’s equestrian statues.

After retiring as State Historian in 1963, Agnes continued her writing career, and was active in organizations such as the Denver Women’s Press Club and the Denver Posse of Westerners. In 1983, she was inducted into the National Cowgirl Hall of Fame. Agnes passed away in 1988, and is buried in Wyoming.

On Saturday, June 20, History Colorado will be offering a free Zoom lecture on Agnes Wright Spring as part of their Colorado Women Lecture Series. More information on Agnes can be found in the Fort Collins History Connection’s digital collections and in A Woman of Firsts: A Biography of Agnes Wright Spring, Author, Historian, and Advocate, an M.A. thesis by Kaylyn Mercuri (University of Colorado Denver) available online through the Auraria Library.