The Colorado Historic Newspapers Collection (CHNC) has a lot of gems in its archives. Brightside, I would say, is a gem among gems. Thanks to Denver Public Library’s Western History Collection, CHNC currently has four issues of this fascinating “Official Organ of the American Boys’ League,” amounting to 44 small pages. Small as it is, Brightside packs a punch. Click the links to view the issues and read on for a few highlights:

The American Boys’ League was created in Denver “FOR BETTER, PURER, MORE MANLY LIVES AMONG THE BOYS OF AMERICA.” The goal of the Brightside school (which was established on August 4, 1893) was to house and educate delinquent or orphaned boys aged 6-21 into becoming good Christian men, as well as successful, upstanding citizens:

The pupils of Brightside are ‘those who have lost one or both parents, or who have been neglected, or are wanderers, or whose parents on account of poverty or other causes have been unable to properly fit them for life’s responsibilities, or those who have criminal or depraved parents; in short, any boy who has been in unfavorable surroundings.’ As no boy is ever refused admission into Brightside, many of them come after months or years of roughing it and of travel from place to place. They are of a restless disposition, and the city having so many temptations, these new recruits are led easily away again before they really come under the influence of the School.’

The paper profiles some of the boys, details current events at the school, and gives explanations about its mission. A cursory browse of Brightside will reveal to you the paper’s extraordinary photography. Pale boys with uniformly shaved heads dressed in the ultra-formal fashion of the day are frozen in black and white images that, to modern eyes, are sometimes disquieting in their strangeness. 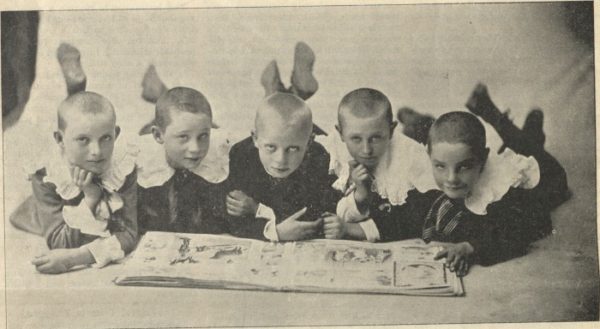 Sometimes, though, the individual character of a boy is on full display in these images, and the lively and often funny commentary makes for entertaining reading. Take Trever, for example.

Two years ago last June a very dirty and dejected-looking boy called at our house and told a pitiful story, manufactured for the occasion, because he supposed that telling the truth about himself would bar him from the school, and as he had run away from his grandparents it was necessary for him to be admitted to Brightside, for he was very, very hungry and frightfully dirty. So we entered in our book, according to his statement, that he was an orphan without a relative in the world.[…] Trever was odd—and fat. He was also nearly twelve years old. After he had been here a month or so, when he was sure that we loved him so much that we couldn’t part with him, he suddenly remembered that he had grandparents here in the city, and we soon discovered that he had run off from them.

[…] His grandparents, who are excellent people, said that he had not been the best boy on earth, and if any one else could make a good boy of him they were very glad. And then such a smile as you see in the picture spread over Trever’s fat face and he hugged and kissed Mr. Field ecstatically. Brightside boys are not taught to be religious; they absorb goodness. In a little while, without a word from any one, Trever was taking an active part in our Christian Endeavor services and the little Bible which he found and carried in his pocket during the day was under his pillow at night.

It is revealed that Trever has two sides. One of them is the earnest Christian boy, dedicated to his faith, the school’s mission, and spreading its message – but there is another more jokey side (and this duality is supposedly illustrated by the above picture):

It is impossible to give any adequate idea of the other side, for it is such a love of fun and the grotesque that even his big organ of conscientiousness is occasionally overshadowed by it. We have seen great numbers of all kinds of boys, but never one who could study up such numbers of extremely rediculous [sic] things to make other people laugh. He laughs as much, if not more, than any boy in the school, but when he provides amusement for others he is as sober as a deacon at a funeral. As may be expected, he does not lack for friends, and the other day when his fourteenth birthday was celebrated, he was the recipient of a great many ‘birthday kisses.’

This Brightside tradition of “birthday kisses” is explained, in case you’re curious.

An Authentic Picture of Adam and Eve

Some parts are notable for their sheer cuteness. Take this for example: 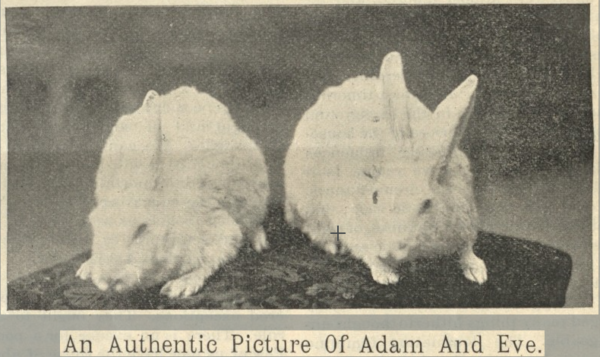 We give above the first authentic picture of Adam and Eve ever printed. They received their names because they are our first pair of white rabbits, the progenitors of the great stock of white bunnies which we will have for sale in a few years. Being sinless, they are masters of all they survey. Our cats are afraid of them because of their exceedingly sharp teeth, and Jack, our dog, who will attack anything double his size, gets out of the way for Adam and Eve, for he don’t dare to hurt them and he don’t like to be bitten. Eve doesn’t care much for apples, but she is fond of cabbage, potatoes and shoes. This happy couple is a never-failing source of delight to our pupils.

We are Asking God for One Million Dollars

At the top of each page, one of the chief reasons for the newspaper’s existence is shown with that sentence: “We are Asking God for One Million Dollars.” Indeed, fundraising seemed to be a major concern for the school. Colorado Governor Alva Adams explained:

I have never visited Brightside but I know Mr. Ralph Field [the Superintendent]—believe in his intentions and have faith that he will yet build up an institution that will be a school where boys will take high degrees in manhood and independence. His great need is funds. If that is provided he will be a father and a teacher to many unschooled orphans.

The need for money, and the publication’s forthrightness about that fact, result in some plaintive passages. For example, there is a small article called Walter France, which says, in full:

On another page is a picture of Walter standing at a carpenter’s bench. Walter is our boy but he is not with us any more. Among over 750 pupils who have been enrolled here he was the only one to pass into the spiritual world. We all loved him so deeply that our carpenter shop is to be named the “Walter France Shop,” for Walter was to have been a carpenter. We would like to put about $1,000 in that shop. It would be a great help to Brightside and a grand place for about a dozen of our boys. We wonder if we must wait much longer for the money.

An editorial from the Rocky Mountain News which is included in Brightside, makes it plain:

No doubt the conditions at the Brightside school are far from ideal. Of the seventy-five boys at the institution only twenty are paid for by friends or relatives. The other fifty-five render gladly what help they can by their own labor, but when they have done their best there remains a great gap which is filled only by the almost superhuman efforts of Mr. and Mrs. Field. To those who have looked into the institution it is a marvel that Superintendent Field and his wife have done so much. They are without means and live lives of self-denying devotion.

But let it be remembered that poor as the accommodations may seem to eyes accustomed to other surroundings, they are infinitely better than would be the lot of the large majority of the boys if the place did not exist. Without the school two-thirds of the boys would be street waifs, sleeping in alleys and doorways, and in a fair way to become criminals. At the school they are taught honesty and self-respect. A good influence bears upon them. Morally and physically the life is far better than their old life. And the aim is to make them self-supporting.

Brightside is a delight in its entirety, a true window into our history, so make sure you check it out. And while you’re at it, check out the publication, The Champion, a continuation of Brightside.