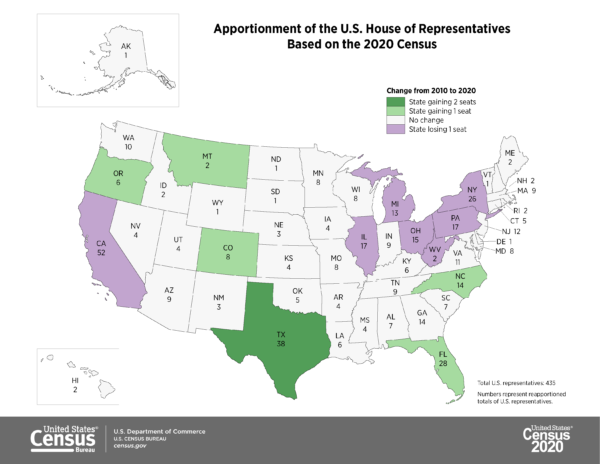 This week, the Census Bureau released reapportionment data from the 2020 census. What is reapportionment? The population data from the census determines how many seats each state gets in the U.S. House of Representatives, so reapportionment refers to the adding or taking away of congressional seats based on gain or loss in population. Because the initial census data has shown that Colorado’s population has grown 15% in the last decade, Colorado will be getting an additional seat. This will bring us to eight seats in the US House of Representatives. (Add our two Senators, and Colorado will have ten electoral votes in the next Presidential election). The other states to gain a seat based on the 2020 Census are Montana, Florida, North Carolina, and Oregon, while Texas will be gaining two seats. The states that lost a seat – i.e., the states that are most quickly losing population – are California, Illinois, Michigan, New York, Ohio, Pennsylvania, and West Virginia. All other states will retain their current number of seats.

Before a new representative can be elected, the state must go through the redistricting process. The current congressional districts will be dissolved and the state will be divided into eight new districts, each with a population of roughly 722,771 people. The state is also undergoing redistricting for the State Legislature, which also divides districts based on population. Colorado has a new process for redistricting this year, based on the passage of 2018’s Amendments Y and Z. These amendments took the redistricting responsibilities away from the Legislature and set up two independent commissions, one for the congressional redistricting and one for legislative, each composed of equal numbers of Democrats, Republicans, and Unaffiliateds. Visit the official website, https://redistricting.colorado.gov/, for information on the commissions and how they operate. You can also find information on the previous process, from the 2010 and earlier censuses, by searching the keywords “redistricting” and “reapportionment” in the State Publications Library’s online catalog. 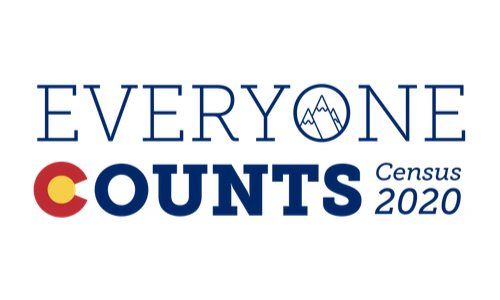