Recently the City of Denver announced that it is redesigning Skyline Park, the park located downtown on Arapahoe Street between 15th and 18th. The redesign will remove the last remaining portions of the original park designed by Lawrence Halprin, one of the late 20th century’s leading Modernist landscape architects.

Originally, buildings filled the blocks now used as a park, and it was also the location of Denver’s Central Loop, the hub for the city’s tramway lines. Then, in 1958, the Denver Urban Renewal Authority (DURA) was formed in order to redevelop “blighted” areas. In 1964 DURA began its Skyline Urban Renewal Project, which wiped out most of the structures between 20th Street, Speer Boulevard, Larimer, and Curtis Streets. Much of this area was turned into surface parking lots, and over the next few decades some highrises and other buildings were constructed. The area along Arapahoe, totaling one acre, was set aside during the Skyline project as park space.

Lawrence Halprin was selected to design the park, which featured large geometric concrete planters and fountains meant to evoke rock outcroppings. Sunken below street level and surrounded by plantings, the park was envisioned as an oasis in the noisy city where office workers could enjoy a break or lunch. In addition, children could often be found climbing on the concrete forms and splashing through the fountains, and skateboarders also made use of the park.

Halprin (1916-2009) graduated from the Harvard Graduate School of Design, where he studied with such luminaries as Walter Gropius and Marcel Breuer. Halprin began his landscape architecture following service in WWII. He became best known for his sculptural fountains, which he intended to be human-scale and interactive. Halprin’s designs were built in numerous states across the U.S., with the heaviest concentration on the West Coast. Skyline Park was Halprin’s only project in Colorado. 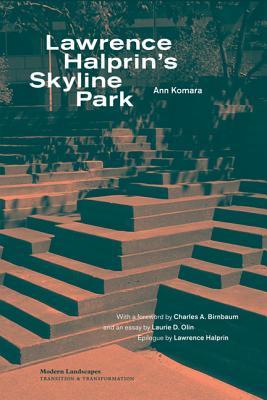 In 2003, most of Halprin’s original Skyline Park was removed or simplified, with only two of the original fountains left intact. In response to the original 2003 redevelopment, Professor Ann Komara of the University of Colorado Denver’s School of Architecture and Planning published Lawrence Halprin’s Skyline Park, a book about the park’s history, design, and transition. Included in the book — which is available for checkout from the State Publications Library — is an Epilogue by Halprin himself.