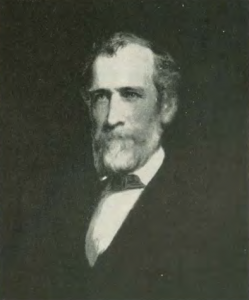 After the resignation of John Evans, Alexander Cummings (served 1865-1867) was appointed Territorial Governor of Colorado by President Andrew Johnson. Cummings had previously served as a special purchasing agent for the War Department during the Civil War and, after being discharged from this post, had in February 1864 attained the rank of Brigadier General and Superintendent of Troops of African Descent for the State of Arkansas.  Originally from Pennsylvania, Cummings’ pre-war career had been as a newspaperman.

In Colorado, Cummings differed markedly from his predecessor.  Although both governors were Republicans, Cummings — unlike Evans — opposed statehood, and caused a deep divide between himself and those Coloradans working toward attaining statehood.  Amidst this and other controversies, Cummings left Colorado after less than two years to return to his native Pennsylvania, holding several posts with the federal government.  He died in 1879.

In 1957 William Hanchett wrote an article for Colorado Magazine about the turbulent governorship of Alexander Cummings, who Hanchett called “the villain of Colorado’s territorial history.”  You can read the article online or check out a copy from our library.