The Colorado Historic Newspapers Collection continues to grow as we happily welcome our newest title, The Altrurian, to our online catalog!  This title is especially unique not only because it began publication even before the community it represented even existed, but also because it further adds to the narrative of communal or “Utopian” societies that gained a relatively significant following in the late 19th century in Colorado.  The Panic of 1893, an economic crisis that was marked by the collapse of railroad overbuilding and eventually lead to a series of bank failures, left many Americans questioning the longevity of capitalism.  Many felt that they had not only been abandoned by their government, but that those in power, who capitalism favored, had taken advantage of those who had no power. In response, small groups of determined settlers elected to remove themselves entirely from this system in favor of a more communal lifestyle in which they could support and rely upon one another. 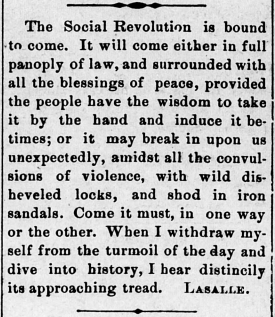 The Altrurian was the weekly newspaper for one such community that was established in the Tabeguache Park of Southwestern Colorado: Piñon. However, Piñon was neither a religious community like others at the time, nor was it an escape for the lazy from hard work and struggle.  It was instead envisioned as an opportunity for a small group of motivated and hardworking individuals to come together and claim a section of land on which they could build a better life for themselves and their families without the banks that had failed them.  According to the Desert Land Act of 1877, an individual could claim up to 640 acres of land for $1.25/acre, providing that individual could bring water to the land for irrigation. Thus the town was the brainchild of The Colorado Cooperative Company, an organization established by several prominent members of Denver society who had become disenchanted with the economic and political climate.

The Altrurian was an important tool for the Colorado Cooperative Company even before the town of Piñon was founded in 1896.  In 1895, the Altrurian began publication and nationwide distribution as a means of recruiting aspiring settlers to join the CC Company and claim their own portion of the land.   Once the town was firmly established in 1896, however, the Altrurian began weekly publication and included information about community events, updates on (and encouragement for) the irrigation project, and the Cooperative’s articles of incorporation and by-laws for newcomers or veterans who needed reminding of the principles on which the town was founded.  Though Piñon (later renamed Nucla after the completion of the irrigation ditch) was built on the principles of every citizen doing an equal share of often very hard labor, the community attracted a large number of artists and musicians. This meant that community functions were not only quite lively and well-attended, but also quite frequent.  After one such town dance that lasted well past dawn, community members explained that, “our visitors undoubtedly think we dance all the time over here, but we don’t— we build ditches, most of the time, although we did have three dances last week” (pg.22, Colorado Heritage Magazine, July-Aug 2016).  The Altrurian gave notice of such upcoming events, chronicled the happenings of past events, and called for volunteers to plan the next.

Though the completion of the irrigation ditch in 1901 and renaming of the town from Piñon to Nucla also ushered in the dissolution of the Colorado Cooperative Company and The Altrurian, the story of this truly unique Colorado community remains.  The Colorado Historic Newspapers Collection now contains digitized copies of 130 issues (nearly every issue) of The Altrurian from 1895-1901, giving voice to its townspeople who set out to build something of their own in a world that seemed to belong only to a few.  Search the issues by date to track the progress of the irrigation ditch or by keyword to learn about its women, schools, or events and explore the lives of these exceptional Coloradans who struck out on their own in order to forge something new. And make sure to check back at the Colorado Historic Newspapers Collection often, as we are adding new issues and titles to our online catalog all the time!