The Colorado State Library would like to invite everyone to celebrate Black History Month with our newly updated Book Club Resource! Over the past year, we have refocused our energy toward making our book club collection more diverse and inclusive, so that readers from all cultures and backgrounds can find stories for them written by someone like them. This Black History Month, we are proud to highlight some of our favorite black voices as we remember the struggles of the past and work toward a more equitable future. 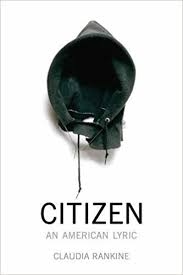 Claudia Rankine’s bold new book recounts mounting racial aggressions in ongoing encounters in twenty-first-century daily life and in the media. Some of these encounters are slights, seeming slips of the tongue, and some are intentional offensives in the classroom, at the supermarket, at home, on the tennis court with Serena Williams and the soccer field with Zinedine Zidane, online, on TV-everywhere, all the time. The accumulative stresses come to bear on a person’s ability to speak, perform, and stay alive. Our addressability is tied to the state of our belonging, Rankine argues, as are our assumptions and expectations of citizenship. In essay, image, and poetry, Citizen is a powerful testament to the individual and collective effects of racism in our contemporary, often named “post-race” society. 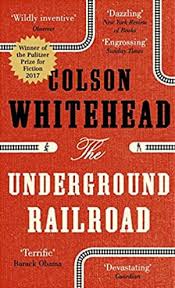 The Underground Railroad
by Colson Whitehead

Cora is a slave on a cotton plantation in Georgia. Life is hell for all the slaves, but especially bad for Cora; an outcast even among her fellow Africans, she is coming into womanhood—where even greater pain awaits. When Caesar, a recent arrival from Virginia, tells her about the Underground Railroad, they decide to take a terrifying risk and escape. Matters do not go as planned—Cora kills a young white boy who tries to capture her. Though they manage to find a station and head north, they are being hunted.

In Whitehead’s ingenious conception, the Underground Railroad is no mere metaphor—engineers and conductors operate a secret network of tracks and tunnels beneath the Southern soil. Cora and Caesar’s first stop is South Carolina, in a city that initially seems like a haven. But the city’s placid surface masks an insidious scheme designed for its black denizens. And even worse: Ridgeway, the relentless slave catcher, is close on their heels. Forced to flee again, Cora embarks on a harrowing flight, state by state, seeking true freedom.

Like the protagonist of Gulliver’s Travels, Cora encounters different worlds at each stage of her journey—hers is an odyssey through time as well as space. As Whitehead brilliantly re-creates the unique terrors for black people in the pre–Civil War era, his narrative seamlessly weaves the saga of America from the brutal importation of Africans to the unfulfilled promises of the present day. The Underground Railroad is at once a kinetic adventure tale of one woman’s ferocious will to escape the horrors of bondage and a shattering, powerful meditation on the history we all share. 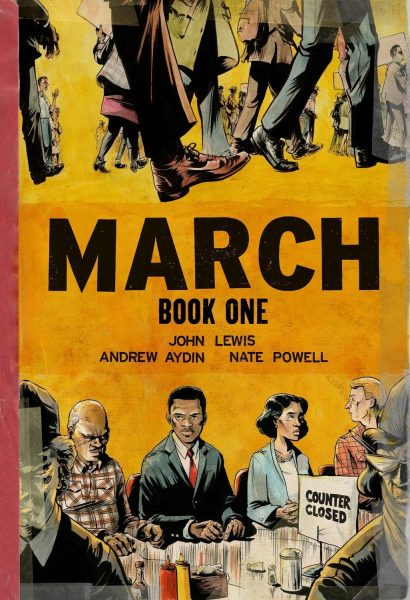 Congressman John Lewis (GA-5) is an American icon, one of the key figures of the civil rights movement. His commitment to justice and nonviolence has taken him from an Alabama sharecropper’s farm to the halls of Congress, from a segregated schoolroom to the 1963 March on Washington, and from receiving beatings from state troopers to receiving the Medal of Freedom from the first African-American president. Now, to share his remarkable story with new generations, Lewis presents March, a graphic novel trilogy, in collaboration with co-writer Andrew Aydin and New York Times best-selling artist Nate Powell (winner of the Eisner Award and LA Times Book Prize finalist for Swallow Me Whole).

March is a vivid first-hand account of John Lewis’ lifelong struggle for civil and human rights, meditating in the modern age on the distance traveled since the days of Jim Crow and segregation. Rooted in Lewis’ personal story, it also reflects on the highs and lows of the broader civil rights movement. Book One spans John Lewis’ youth in rural Alabama, his life-changing meeting with Martin Luther King, Jr., the birth of the Nashville Student Movement, and their battle to tear down segregation through nonviolent lunch counter sit-ins, building to a stunning climax on the steps of City Hall. Many years ago, John Lewis and other student activists drew inspiration from the 1958 comic book “Martin Luther King and the Montgomery Story.” Now, his own comics bring those days to life for a new audience, testifying to a movement whose echoes will be heard for generations. 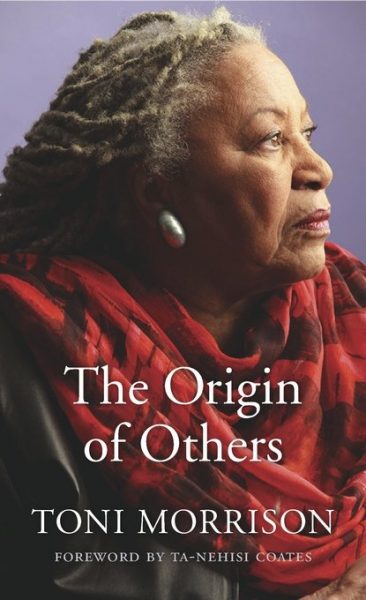 The Origins of Others
by Toni Morrison

America’s foremost novelist reflects on the themes that preoccupy her work and increasingly dominate national and world politics: race, fear, borders, the mass movement of peoples, the desire for belonging. What is race and why does it matter? What motivates the human tendency to construct Others? Why does the presence of Others make us so afraid?

Drawing on her Norton Lectures, Toni Morrison takes up these and other vital questions bearing on identity in The Origin of Others. In her search for answers, the novelist considers her own memories as well as history, politics, and especially literature. Harriet Beecher Stowe, Ernest Hemingway, William Faulkner, Flannery O’Connor, and Camara Laye are among the authors she examines. Readers of Morrison’s fiction will welcome her discussions of some of her most celebrated books―Beloved, Paradise, and A Mercy.

If we learn racism by example, then literature plays an important part in the history of race in America, both negatively and positively. Morrison writes about nineteenth-century literary efforts to romance slavery, contrasting them with the scientific racism of Samuel Cartwright and the banal diaries of the plantation overseer and slaveholder Thomas Thistlewood. She looks at configurations of blackness, notions of racial purity, and the ways in which literature employs skin color to reveal character or drive narrative. Expanding the scope of her concern, she also addresses globalization and the mass movement of peoples in this century. National Book Award winner Ta-Nehisi Coates provides a foreword to Morrison’s most personal work of nonfiction to date. 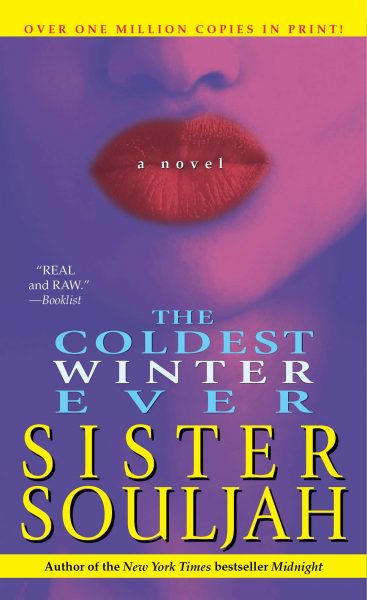 The Coldest Winter Ever
by Sister Souljah

During one of New York’s worst snow storms, Winter is born to Ricky Santiaga and his wife. At the age of sixteen, Winter is well-accustomed to a life of decadence provided by her notorious father who commands an intricate family web of drug dealers in their Brooklyn ghetto. As familiar as she is with riches, she is also acutely aware of the devastation of urban poverty to which she is determined never to succumb.

Her father’s decision to move his family to Dix Hills, an affluent Long Island suburb, creates unimaginable consequences. Winter is left alone to find her way precariously through the shifting maze of power, sex, money, and drugs, determined to vindicate her father and rise above the laws, social welfare system, poverty, and dangers that surround her.

Author Sister Souljah, a political activist, is a part of this story as a constant voice through all of Winter’s struggles. Winter hears Souljah’s voice intermittently on the radio and lives with her briefly while in pursuit of her own dubious ambitions. Souljah’s pleas to the young black women she works with to realize their dignity, beauty, and inner power fail to find a place to rest in Winter’s driven spirit.

The Coldest Winter Ever is a fast-moving, impeccably brilliant account of choices and consequences within the urban hip-hop culture. Sister Souljah writes eloquently with expressive insights and language of youth. Amidst the crisis and cruelty of inner city poverty and seemingly insurmountable struggles, Sister Souljah’s voice is one of grace and unmistakable clarity in one young woman’s coming-of-age story.

Celebrate black history all year long by checking out these and many other great titles from the Colorado State Library’s Book Club Resource!

(All book descriptions taken from Amazon.com)