For over 150 years, the cattle industry has been an integral part of Colorado’s agricultural economy and of our state’s history. The State Publications Library collection includes hundreds of documents, both historical and recent, that tell the story of this important industry.

The development of cattle ranching in Colorado is closely aligned with other factors that influenced the historical development of the state, including the mining industry and the removal of Native American tribes onto reservations. In the mid-nineteenth century, lands on the eastern plains of Colorado Territory that had previously been inhabited by Cheyenne and Arapaho Indians opened up to white settlement. Meanwhile, miners flocking to the territory in search of gold and silver needed to be fed. So cattlemen started trailing Longhorns up from Texas to graze on Colorado’s open range as well as to be sent for transport on rail lines through Denver and elsewhere.

As Colorado’s cattle industry grew, it was increasingly controlled by investors from the East and overseas who turned some ranches into large-scale operations. James Michener’s novel Centennial provides a fictionalized account of how these ranches developed, beginning with the cattle drives from Texas and continuing through the challenges faced by the industry in the 1870s and 1880s. Before the end of the century, competition for water and between cattle and sheep ranchers brought about the end of the open range, which had also been crippled by a severely damaging winters in the mid-1880s. Yet Colorado cattle ranching continued to grow. An 1889 publication from the Colorado Bureau of Immigration and Statistics, The Natural Resources, Industrial Development, and Condition of Colorado, explores the industry in detail and is a significant primary resource for anyone researching the Colorado cattle industry in the late nineteenth century. Through the years, cattle ranching spread beyond the Eastern Plains into the mountains and the Western Slope. Several cattlemen’s associations were formed and the National Western Stock Show was established, which continues to this day as the best-known representation of Colorado’s cattle industry.

The State Publications Library collection includes hundreds of publications on Colorado cattle ranching and livestock, far too many to list here. Some highlights, however, include the Colorado Brand Books (one of the most requested items in the collection), which list all of the registered brands in Colorado. A new edition of the Brand Book is published every five years; the library has volumes dating back to 1972. Another important resource is the Colorado Department of Agriculture’s annual Colorado Agricultural Statistics, which provides an in-depth statistical analysis on Colorado agriculture. Volumes from 1883 to the present are available in the library’s digital collection. Additional statistics can be found in the Year Book of the State of Colorado, published annually from 1918 to 1950. 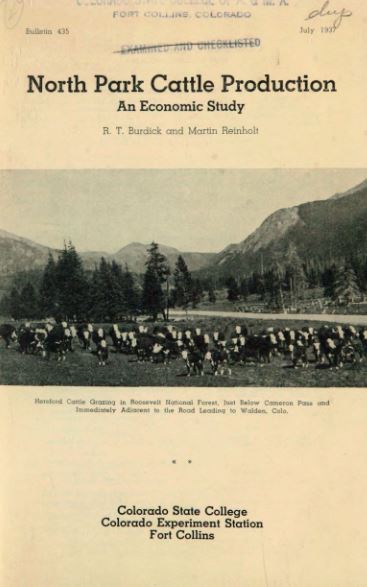 Also available are historical publications from the Colorado Experiment Station and the Colorado Extension Service. These publications provided information and advice for Colorado ranchers large and small. Today, they offer a window into the industry’s history. Some titles include:

For more publications, from the nineteenth century to the present day, search the library’s online catalog using keywords such as cattle, livestock, ranching, or agriculture.