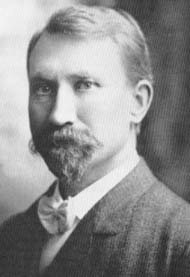 One of late-nineteenth and early-twentieth century America’s greatest botanists extensively studied the flora of Colorado, and left us what is still one of the most important works on the state’s flowers.

Per Axel Rydberg (1860-1931) emigrated to the United States from Sweden in 1882.  His career as a botanist came somewhat by accident.  Upon moving to the United States, he planned to become a mining engineer, but while working in the iron mines of Michigan he suffered a serious leg injury that left him with a lifelong limp and closed the door on a mining career.  Instead, he turned to intellectual pursuits, paying his way through the University of Nebraska by teaching mathematics.  After receiving his M.A. Rydberg was hired by the U.S. Department of Agriculture to study the botany of Nebraska and South Dakota, publishing his first work in 1895.  He then when on to earn his Ph.D. from Columbia University in 1898, and two years later, Rydberg first came to Colorado to study the state’s flora.  Over the next three decades of his life Rydberg would specialize in studying the flora of the Rocky Mountains and the Great Plains, discovering several plant species and publishing numerous works.  He also continued his connection to New York, serving as the first curator of the New York Botanical Garden Herbarium.

Rydberg’s publications include studies of the botany of Nebraska, Utah, Yellowstone National Park, and even the Yukon, but one of his most significant publications remains his 1906 Flora of Colorado, published by the Colorado Agricultural College’s Experiment Station.  This nearly-500 page book has been digitized and is available online from our library.

Also from our library you can learn about some of the plants and flowers that Rydberg studied and discovered, which bear his name.  Some of these species are now rare or imperiled.  You can read conservation assessments from the Colorado State University’s Natural Heritage Program on the following species named for Rydberg: