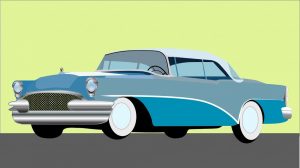 Certainly a lot has changed in the last fifty years regarding vehicle safety!  Consider this excerpt from Highway Safety in Colorado, a 1966 legislative research report:

Seat belts have reduced deaths and injury on the nation’s highways and have long been utilized by racing car drivers.  Many states have adopted legislation requiring the installation of seat belts in passenger vehicles; unfortunately these mandatory programs have not been successful in developing a high degree of utilization by persons riding in private vehicles.  For this reason, the [Legislative Committee on Highway Safety] is reluctant to recommend mandatory legislation for passenger vehicles.  On the other hand…the committee urges the State Department of Education to take action to encourage installation of seat belts in school buses.
Today we still struggle with making sure private vehicle passengers use their seat belt, but it is difficult to imagine that we would not have seat belt laws just because some people won’t buckle up.  Conversely, we still don’t have laws requiring seat belts in school buses, despite the legislative committee’s suggestion fifty years ago.  (See the Colorado Department of Education’s publication The Issue of Lap Belts in School Buses for information on current law and practice).
Here’s another excerpt from the 1966 report:
Nationwide, highway safety officials have been unable to cope with the problems posed by the drinking driver. … Enforcement officers, licensing officials, and the judiciary have been relatively successful in fining, jailing, and suspending licenses of persons driving while under the influence of alcohol.  However, all three of these penalties have not proved an effective deterrent to the alcoholic driver.
Doesn’t sound too much different from today, does it?  But consider this — in 1966, the legal limit for blood alcohol content (BAC) was .15, almost double what it is today.  The committee recommended “a lesser charge of drinking and driving for persons with a blood alcohol level of .10 per cent and over but less than .15 per cent.  Although an individual may not be under the influence of alcohol, his reflexes, judgment, ability to make quick decisions, etc., can be impaired.”  Compare this to today, where .05 is considered “ability impaired,” and .08  is the legal limit for driving under the influence — two percentage points below what was only “impaired” in 1966.
For more comparisons between yesterday and today, you can view Highway Safety in Colorado online from our library, along with thousands of other publications that tell the story of life in Colorado.