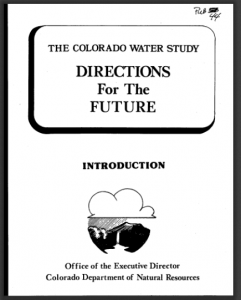 The 1970s were times of major growth in Colorado, and with it came an increased concern over the conservation of natural resources, as evidenced by Colorado voters’ rejection of the 1976 Olympics.  The natural resource that became the State of Colorado’s biggest conservation priority was water, and in 1978 Colorado conducted a major water study, the reports of which have been made available online by our library.  The Colorado Water Study:  Directions for the Future included an initial introductory volume, followed later by a nearly-800 page Legal Studies volume.  The study examined Colorado water rights, public interest, future demand, and conservation.  The 1978 study was followed up a year later with Water and Growth:  An Inquiry into the Potential Impact of Municipal Water Use Restrictions Upon Future Growth of the Colorado Front Range Urban Corridor, which is available for checkout from our library.

How much has changed in nearly 40 years?  An analysis can be made by comparing these documents with the major Colorado Water Plan issued in 2015, as well as other state documents produced in the intervening decades.  Because water is such an important issue in Colorado, our library contains hundreds of studies on our state’s water resources, which you can find using our library’s online catalog.  Some of the other studies from the 1970s era of growth, also available online, include:

The challenge of water and growth was not limited to the 1970s, of course; see 1999’s Finding Water for One Million New Residents and 2001’s Water and Growth in Colorado.  The information in these reports can be helpful for planning for the future now that Colorado is in the midst of another population boom.