Skip to content
Her gleaming mountains capped with snow,
Rolling plain and high plateau,
Make the land the best I know–
Sunny Colorado!
— from the poem “Sunny Colorado” by Eugene Parsons

August 1 is Colorado Day, the anniversary of Colorado’s statehood (August 1, 1876).  In 1913, the state’s Department of Public Instruction (now the Department of Education) issued A Book of Holidays, which included poems, essays, songs, and activities that could be used by teachers — or anyone — in commemorating and learning about holidays and anniversaries throughout the year.  Included were the popular holidays we still celebrate, as well as some that are no longer really remembered, such as Susan B. Anthony’s Birthday (February 15), Good Roads Day (May 9), and Peace Day (May 18). 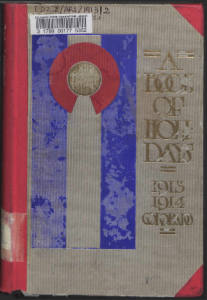 Among the holidays covered in the book is Colorado Day, August 1.  The Colorado Day section includes several poems, such as the one excerpted above; photos of Colorado scenery; “Some Books of Interest on Colorado;” a couple of essays on Colorado tourism; a speech by Robert W. Steele, an early Colorado Territory politician; and “Origin of Some of the Names of the Counties of the State of Colorado.”

A Book of Holidays has been digitized by our library.  For more online documents that tell the story of our state, visit our library’s digital repository.