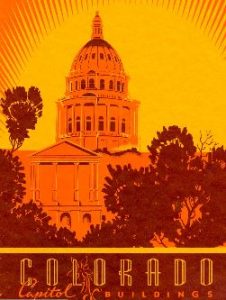 For those interested in Denver’s architecture, one of the treasures of our library collection is a 1940s publication entitled Colorado Capitol Buildings.  This booklet, prepared by the Colorado Writers’ and Art Programs of the Works Progress Administration, is undated but contains a dedication to the armed forces by Governor Ralph Carr, who served between 1939 and 1943.  The booklet presents a “historical sketch of the Colorado Capitol and associated group of buildings.”  When the Capitol was first completed, it was considered large enough to hold all state offices indefinitely.  However, after only a few decades of growth it was apparent that additional space would be needed for State offices and functions.

The first to leave the Capitol was the State Museum, for which a new Neoclassical structure was built between 1912 and 1915 at the corner of 14th and Sherman.  The museum had previously been housed in the basement of the Capitol.  The new structure was designed by Frank Edbrooke, the same architect who finished work on the Capitol.  (It had been begun by Elijah Myers).  Today this building is the Legislative Services Building and houses the Joint Budget Committee and the State Auditor’s Office.

The second building, at Colfax and Sherman, replaced a large home that had belonged to William Byers, founder of the Rocky Mountain News.  The new building, completed in 1921, was the first building constructed to house state offices; it was therefore named the State Office Building.  Over the years, a number of state agencies have been housed in this building; today it is home to the Colorado Department of Education and, as a part of that Department, the State Publications Library. Also Neoclassical in style, the building features an impressive atrium of checkered marble, brass fixtures, and a colorful stained glass skylight.  The building underwent a significant renovation in the 1980s; plans for the renovation can be viewed in our library.

By the 1930s, Neoclassical government buildings were declining in popularity, so the next building constructed to house state offices, the Capitol Annex, is of modern design, simplified but with suggestions of Art Deco.  The smooth exterior is composed of Colorado Yule marble.  This building is located at 14th and Sherman across the street from the old State Museum building.

Each of these three buildings are described in the booklet, along with photographs.  Of course, a number of other buildings have been constructed since that time for state government use.  The State Museum (now History Colorado) is on its second building since moving out of the 1912 structure; several office buildings were constructed along Sherman Street both north and south of the Capitol; and other offices are located around city and the metro area, outside of what is now known as the Capitol Complex.

The little booklet is a gem in that it not only gives a history of the Capitol and its first three annexes, but it also tells the story of some of the earlier buildings used to house state government before the construction of the present Capitol, and how it came to be there.  A promotional publication, it also includes a page on Colorado tourism as well as a listing of the state symbols and emblems.  Colorado Capitol Buildings is available both digitally and in print from our library.  For additional information about the Capitol and surrounding structures, search our web catalog using search terms “capitol building” or “capitol complex.”