Avalanche danger is nothing new in Colorado.  Forty years ago, the University of Colorado’s Institute of Arctic and Alpine Research issued their publication Century of Struggle Against Snow:  A History of Avalanche Hazard in San Juan County, Colorado.  The publication, which can be viewed online via our library, examines avalanches and avalanche disasters in the San Juan region of Colorado from 1875-1975.  “San Juan County was a booming gold- and silver-producing area, reaching its peak in population, mineral production, and, correspondingly, avalanche deaths and destruction of property during the period 1880 through World War I.” 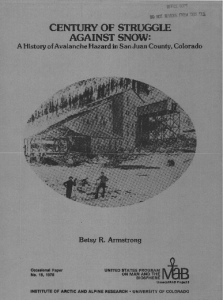 According to the publication, major avalanche disasters occurred in March 1884, February 1891, and March 1906.  The latter avalanche took the lives of twelve men employed by the Shenandoah Mine.

For more on avalanches yesterday and today, search our library’s web catalog.