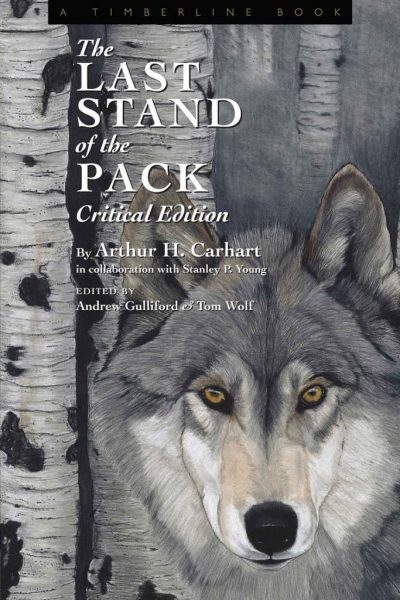 If wolves were reintroduced in our state, would they benefit the environment or be a nuisance for ranchers? In spite of a 2016 resolution passed by Colorado Parks and Wildlife stating that wolves would not be purposefully reintroduced into the state (although those that wander here on their own won’t be removed), the debate continues.

Andrew Gulliford, a professor if history and environmental studies at Fort Lewis College, is an advocate for reintroduction and recently co-edited a book outlining the science, and the debate, behind the reintroduction of wolves. According to Gulliford’s blog posting for University Press of Colorado — the publisher of his book The Last Stand of the Pack — evidence for wolves’ contribution to the ecology of the mountain west can be seen in Yellowstone:

I teach my college students that wolves brought songbirds back to Yellowstone. I explain that wolves cut the coyote population in half. With fewer coyotes there are more small rodents and mammals aerating the soil and providing better grasses. But the largest and most dramatic effect has been the culling of the Yellowstone elk herd. By 1995 the ungulates had done severe damage to the vegetation of the park. Wolves changed that. As wolf packs began to hunt elk, the wapiti were slowed and caught in downed timber along rivers and streams. So elk learned safety meant higher sagebrush benches where they could see and smell better. With fewer elk, plants recovered. Aspen thrived. And in this new thicker forest of riverine vegetation, beaver colonies established small pools, attracting other animals, insects, and, yes, butterflies.

The State of Colorado has been studying the issue of wolf reintroduction since the 1980s. In our library you can find several reports on the topic, including

The Last Stand of the Pack is also available for checkout from our library. This book was originally issued in 1929 by famed Colorado naturalist Arthur Carhart and Stanley P. Young. Gulliford and the aptly-named Tom Wolf edited the new edition for University Press of Colorado. This expanded edition contains new writings by Gulliford and other contributors who discuss the debate over reintroduction since Carhart’s time.