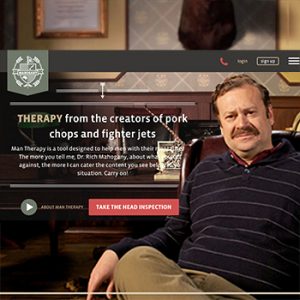 According to the Colorado Department of Public Health and Environment (CDPHE), “Colorado’s suicide rates are among the highest in the country, and males in Colorado are four times more likely to die by suicide than females.”  CDPHE is working to combat this trend with an online resource called Mantherapy.  Originally launched in 2012, the site has recently been revamped, according to a news release from CDPHE.  New features of the site include resources for military/veterans and first responders, videos, and a new personal assessment tool called “head inspection.”  The information is all presented in a friendly, humorous way that can help men deal with anger, depression, anxiety, grief, and more.