A century ago, streetcars were used across America as one of the primary modes of transportation, particularly during the period of transition from horse and buggy to automobile — both early forms of transportation that were out of reach to many ordinary Americans. Here in our state, fifteen Colorado communities were large enough to support streetcar systems: Aspen, Boulder, Colorado Springs, Cripple Creek/Victor, Denver, Durango, Englewood, Fort Collins, Grand Junction, Greeley, Leadville, Littleton, Manitou Springs, Pueblo, and Trinidad.

In the early-to-mid twentieth century, the use and attainability of automobiles expanded significantly. Eventually, cities began opting for motorized buses instead of streetcars, which required track and cable systems all along their routes. By mid-century, most of the old streetcar lines had been retired.

Rather than having the tracks torn out, they were often simply paved over with asphalt. To this day, cracks and disrepair in asphalt can reveal old streetcar tracks poking through, and old tracks are occasionally discovered during road construction projects. Because up to this time these track systems have not been fully documented, and because they may be historic resources eligible for preservation, the Colorado Department of Transportation (CDOT) commissioned a research study, Historic Streetcar Systems of Colorado. Published in September 2020, the report is now available to view online from the State Publications Library. 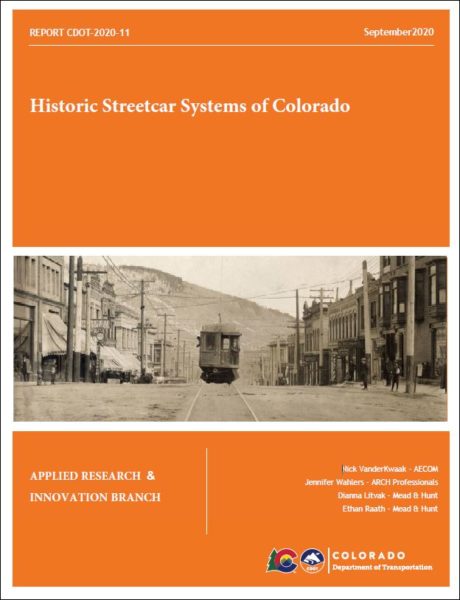 Historic Streetcar Systems of Colorado not only explores the streetcar systems in each of the fifteen Colorado communities, but also offers a GIS mapping component providing streetcar system locations, ownership information, years in operation, and more. (A usage guide for the online ArcGIS Geodatabase is included in the report). “The user-friendly nature of the GIS component will allow interested parties to easily identify the location of buried historic streetcar lines and visualize how the network functioned within the city landscape,” notes the report, which is a useful source of information for local governments, transportation planners, construction firms, engineers, historians and preservationists, and CDOT.

For more CDOT research reports, search the library’s digital repository. You can also read about one of the most disastrous days in the history of Colorado’s streetcar systems in a previous blog post.