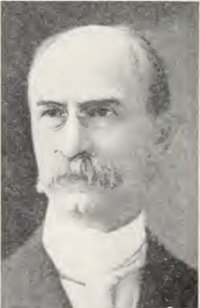 Colorado’s governor from 1899 to 1901 was Charles Spalding Thomas, who served a single two-year term. His inaugural address, bound with outgoing remarks from previous governor Alva Adams, has been digitized and is available online from the State Publications Library.

Charles S. Thomas was born in Darien, Georgia in 1849. He obtained a law degree at the University of Michigan, and later married Emma Gould Fletcher from Kalamazoo. Thomas arrived in Denver in December 1871 and opened a small law practice. He decided to specialize in mining law and economic geology at a time when the Leadville silver boom was in full swing. He was appointed city attorney in 1875 and then returned to private practice in a partnership with Thomas Patterson who later bought the Rocky Mountain News. Thomas was one of the main mining law experts at the time, and in 1879 he moved to Leadville. His office was active in mining litigation for Colorado until 1885 when Thomas moved back to Denver.

In the fall of 1898 he was elected governor of Colorado. His inaugural speech talks about the dire straits of the state’s finances. The loss of the silver standard in 1893 had an adverse effect on state revenues. Many mines closed or were reassessed and property tax collections declined. Thomas’ administration focused on the reorganization of the state’s tax laws in an effort to stabilize state finances. He was also involved in finishing the remaining touches on the construction of the Capitol Building. The portraits for the dome windows in Colorado’s ‘Hall of Fame’ were selected during his term. The speech Thomas delivered at the end of his term can be found in our digital repository.

Charles S. Thomas continued his involvement in Colorado politics and served as a U.S. Senator from 1913-1921. He was also a historian. Several of his articles are published in Colorado Heritage magazine, and he authored a chapter in the 1927 “History of Colorado” entitled “Fifty Years of Political History.”

His son, Sewell Thomas, wrote an interesting account of his life with anecdotes about Leadville during the silver boom. “Silhouettes of Charles S. Thomas, Colorado Governor and United States Senator” is available by request through Denver Public Library.

Charles Spalding Thomas died on June 24, 1934 in Denver. He is buried at the Fairmont Cemetery.