Hummingbirds are among the world’s most fascinating and beautiful birds, and we have several species right here in Colorado. In addition to being enjoyable to watch, hummingbirds are also important pollinators, therefore are beneficial to our native ecosystem. If you are interested in attracting hummingbirds to your property, there are several options including feeders and, even better, growing native plants.

To date there have been recorded sightings of twelve different species of hummingbirds in Colorado. However, most of those species are accidental visitors and are very rarely seen here. The most common species in our state are the Broad-tailed, Rufous, Black-chinned, and Calliope Hummingbirds. Of these, the Broad-tailed is the one you are most likely to see in your yard if you live on the Front Range. Male Broad-tails make a very distinctive humming or buzzing sound, produced by their feathers. So if you’re watching for hummingbirds, keep your ears open – since they are small and move quickly, you’ll often hear them before you see them. Broad-tailed males can also be identified by their green coloration and red throats. Rufous males also have red throats (gorgets), but their primary feathers are a rusty orange color. Black-chinned males are green, but their gorgets are black with a purple band. Male Calliopes have streaky reddish-purple gorgets. Female hummingbirds do not exhibit the bright colors of the males, so the different species are difficult to distinguish.

According to the Colorado Breeding Bird Atlas, Broad-tailed and Black-chinned hummingbirds breed in Colorado, as opposed to Rufous and Calliopes, which only pass through Colorado during migration. Broad-tails are common on the northern Front Range and into the mountains, whereas Black-chins are more often found on the Western Slope.

Many people attract hummingbirds by using feeders. They can be delightful to watch, but if you choose to use a feeder, please do so responsibly. Hummingbird feeders can develop mold growth and bacteria, so should be cleaned often. In addition, Audubon Rockies recommends making your own sugar-water mixture for the feeders, rather than using store-bought mixes which often include dyes that could be harmful to the birds. Instead, simply mix 1 part white cane sugar to 4 parts water. Change the water every day or two to prevent bacteria growth. 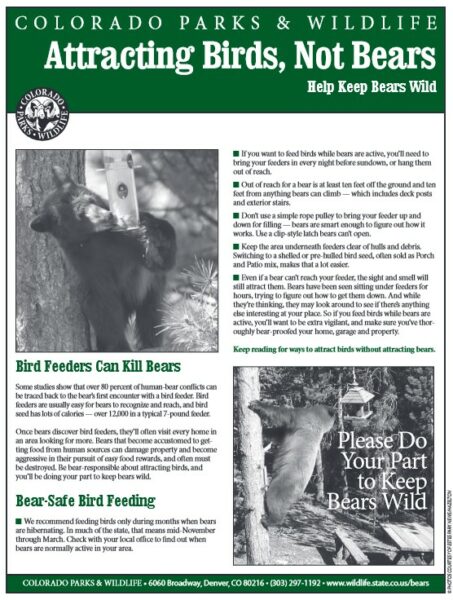 If you live in bear country, be extra cautious when using feeders. In fact, Colorado Parks & Wildlife (CPW) suggests not using them at all, because of the danger of attracting bears. If you do decide to use feeders, however, be sure and read their brochure Attracting Birds, Not Bears, as well as their Colorado Outdoors blog post.

While feeders can be fun and convenient, the safer and more natural alternative for attracting hummingbirds is to use native plants in your yard and garden. Hummingbirds and other pollinators rely on native plants, which are being reduced in number as natural habitats decrease. Flowers are hummingbirds’ natural food source and provide more nutrients than feeders. They are safer than feeders and have the added bonus of being beautiful additions to your landscaping. Native plants that are especially attractive to Colorado hummingbirds include Penstemon and Golden Spur Columbine. Other plants that are well suited to Colorado and attractive to hummingbirds include Agastache (also known as Hyssop); Salvia; Monarda; Honeysuckle; and Trumpet Vines.

When providing habitat, according to the Colorado State University Extension, “location of the garden is extremely important. Most pollinators generally prefer sunny areas and large connected habitats are better than small patchy ones. It is important to have a variety of flowering species planted as groups/swaths in the landscape rather than as single plants. This allows the pollinators to work one area more thoroughly and efficiently, rather than having to move around a great deal to find plants of the same species.” For more tips, see their fact sheet Creating Pollinator Habitat.

Habitat should also provide shelter and protection from predators. Adding trees to your landscape can be helpful for providing this, as well as nesting space and simply a spot to perch. (Yes, while it may seem like hummingbirds are constantly in flight, they actually do perch!). If you or your neighbors have cats, be sure to keep them away from feeders and plants. Cats are among the greatest dangers to backyard birds so are best kept indoors. Also, areas where hummingbirds frequent should be kept clear of pesticides, which can be harmful to them and to other pollinators such as bees and butterflies.